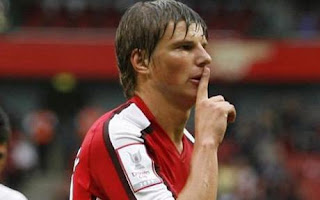 Having said goodbye to the prestigious pre-season tournament Audi Cup, the football fans were happy to say “hello” to another as much prestigious tournament as its counterpart: the Emirates Cup.

In this rainy Saturday, the opening day of the Cup, Arsenal took on Atletico Madrid in the second game of the tournament.

Rangers defeated Paris Saint Germain in the first game of the tournament with 1 goal to 0.

There was plenty of enthusiasm on the stands of the Emirates Stadium as the Arsenal fans were eager to remind themselves of the drama that is to be expected during the new season.

The match started with one minute of applause for the football legend, Sir Bobby Robson, who passed away on Friday.

The first half saw the ball being passed along mostly in the centre of the field.

Emmanuel Eboue was part of the attacking trio in the formation that Wenger had chosen to use once again: 4-3-3. He started on the right side of the attack, but eventually swapped positions with Bendtner.

In the centre was today’s captain of the Arsenal team: Robin van Persie.

He attempted a few through passes, spectacular back-heel passes, and a few extraordinary dribbles.

However, the first half finished without something really interesting developing.

The second half was a completely different picture though.

Armand Traore, returned-from-injury Tomas Rosicky, and Emmanuel Eboue were replaced by Gael Clichy, Fran Merida, and Jack Wilshere, all of whom were taking part in their first game of this year’s pre-season.

It is exactly because of the latter player that the problems for Atletico’s defence significantly multiplied. The 17-year-old Wilshere, once again proved that he has what it takes to be a part of the first team.

His movement down the right flank and his cutting inside toward the centre was a constant menace to Atletico’s defence. His razor sharp passes tore the opposition into shreds, only chance lacking for his team-mates to materialize those passes.

Atletico answered by substituting one of their most threatening players, Sergio Aguero, with German Pacheco.

With twenty five minutes to go, Wenger decided to bring in the heavy cavalry.

It was near the end of the match when the drama was bound to unveil.

As it started pouring over the Emirates, Atletico began to look increasingly threatening with their attacks.

First, Juardo fired a shot from 25 yards to make life miserable for Arsenal’s keeper Mannone. The ball bounced of his hands, fortunately for him, only to pass inches from his left-side post.

Arsenal looked like they were on their way to crumble. But were they?

As the speakers announced man of the match award to Jack Wilshere, hardly would the announcer have known that another Arsenal player will decide the match.

Fabregas crossed the ball to Arshavin, who with a volley from eight yards sent the ball underneath Sergio Asenjo and in the net. 1-0 to Arsenal.

The fans were ecstatic. The match was over for them. But they were wrong.

Atletico still had a knife up their sleeve.

Substitute German Pacheco applied for a first team spot at Atletico after coolly finishing an attack for his team, with only 2 minutes to go until the end of the match. 1-1.

As the supporters started leaving the stadium the unbelievable happened.

It was again the short Russian play maker, Andrey Arshavin, who took advantage of a mistake in Atletico’s defence.

He nudged the ball aside from rushing keeper Asenjo before he was able to reach it, and from, practically, a zero angle sent the ball into the net.

It was a win that took Arsenal to the top of the tournament’s table, with five points, one ahead of Rangers, who beat PSG 1-0 earlier this day.

Arsenal is meeting Rangers on Sunday to decide who will be the winner of the Emirates Cup this year.
Posted by Unknown at 2:29 PM