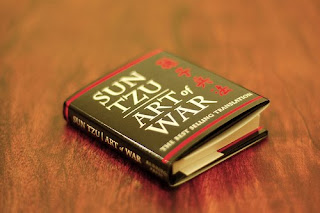 But what’s that got to do with football?

Football has been used, throughout the ages (as yearly as 4000 BC) as a game to serve different pagan believes and also it has been used by the Romans and Chinese as a kind of military training. It was considered to be a game that keeps the body and mind fit for the time they would be put to use—war time.

If we look into many of the tactics used by the managers around the world in nowadays football, we would probably notice a lot of striking similarities with Sun Tzu’s strategies for war.

Let’s not keep you waiting. I’ll let Mr. Tzu do the talking with his book The Art of War:

“You have to believe in yourself.”

It is probably the most obvious thing of all. No win would come to a team without a solid amount of self-confidence and belief in their own abilities. There are plenty of teams out there that have all that is needed to be a great team, but they are found wanting when it concerns those vital attributes.

That exact thought of Sun Tzu could easily replace the “You will never walk alone” slogan Liverpool’s crest. They are the team that have proved that this phrase of Sun Tzu is right recipe for victory more than once.

“Invincibility lies in the defence; the possibility of victory in the attack.”

I doubt if there is a football manager in the world that does not know this rule.

Ask the many Italian football clubs that concentrate their efforts toward defensive style of play. Ask technically-inclined teams that have plenty of attacking power, but also have failed to meet the necessary defensive requirements.

“Thus, what is of supreme importance in war is to attack the enemy’s strategy.”

The essence of football is to outplay the other team tactically. It is the path to victory in football. We have seen many times how less talented teams have taken it all and have beaten stronger teams by using the right tactics and strategy.

A football team is much like an army. The correct executions of the general’s strategy, the manager in this case, would lead to victory. The best teams know how to adapt their game to that of the opposition.

“Know your enemy and know yourself and you can fight a hundred battles without disaster.”

Rule number one when it comes to life, not only football. The surest way to defeat is by not knowing the opposition or yourself. The football team must know their own weaknesses, weak spots, thus where to attack and what to protect themselves from; they must know their strengths and apply them in the most appropriate way.

If a football team is weak in the air, then it is better for them not to cross the ball and keep it on the ground or to attempt to close in the opposition’s wingers.

If a football team lacks technical players then they should attempt to neutralise the oppositional technical players and be more physical. We have also seen this rule work to the advantage of weaker teams many times.

Only a selected few even attempt to try their hands at this. Even though a “fight” cannot be avoided in modern football due to its strict schedules, the resistance of the opposition can be broken even before the start of the particular match.

Sir Alex Ferguson may be considered to be the typical example of the application of this rule works. Not once we have seen him play mind games with other managers. His attempts to disrupt the opposition’s flow have worked on many occasions.

“All war is deception”


Six quotes from Sun Tzu; six rules; and the similarities do not end here.

Football is just a reflection of life, or of what it has been before. People like Sun Tzu and others who have found ways to improve the different aspects of life have also improved exactly that—more than one, different, aspect of life. Football has not been left behind.

Sun Tzu, with his book The Art of War, have given the world not only the basic strategies for successful warfare, but he has also given the modern football managers the formula for success. Sun Tzu would have been a great football manager.
Posted by Unknown at 11:37 AM