Decide Already; Is Arsenal Capable of Winning the League or Not? 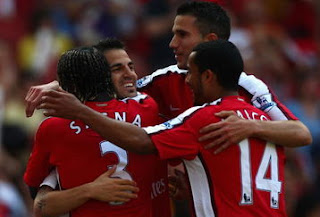 The Premier League has started. There were some surprising results as well as there were some expected results. Interestingly enough, there was one match that contained both of those things.

It was as surprising for some; expected for others. Arsenal won by 6-1 as guests to Everton. Now, the result might have been unexpected by some due to summer problems that Arsenal supposedly had.

The pundits talked and wrote millions of words; they gave thousands of opinions, explained, discussed and argued how Arsenal is about to fall apart or how they are still found wanting. The club was labelled as the fourth-place-to-give-away team this season. They have been considered as title rivals by very few.

In contrast to another team from the Premier League—Manchester City, which was also hugely debated throughout the summer, spent mind-blowing sums of money to buy players; Arsenal sold two of theirs and brought only one.

They were dismissed as title contenders even before the season started. But let me ask why?

If the answer of this question is because they will get a lot of injured players sometime along this season, then I will ask you how you know that.

A lot of people have learnt that history does not lie. Arsenal has not won anything for four years now. Wouldn’t a statement saying that they will fail for another year be considered as a safe bet?

The truth is that it is exactly that.

It is a safe bet; it is safe because it has already happened in the not-so-distant past; it is still fresh in our minds; nothing has been changed, and failure for Arsenal expected to happen again.

But let me try to disrupt that up-to-date notion.

During the previous couple of years, Arsenal has been labelled as a young team without the needed experience to adequately compete in the tournaments. Well, four years of drought have passed. Aren’t the players who were considered green two years ago more experienced now? Have footballers like Denilson, Alexandre Song, Gael Clichy, and Abou Diaby matured since then?

Logically, the answer must be yes.

So, why are then Arsenal being dismissed from the title chase when the same team, only more inexperienced, finished with 84 points two years ago (82 points is usually enough to win the title in most of the cases)?

Some will say because Mathieu Flamini was in that team then, and Aliaksandr Hleb. But Song and Denilson have matured, and Andrey Arshavin cannot be disputed as an adequate replacement for Hleb.

If you remember, it was the year when just before the season Arsenal lost their captain and legendary player Thierry Henry. What were the pundits saying then? Did they expect such a performance by the Gunners? No, they didn’t.

Pundits have argued that Arsenal do not have the needed depth to challenge for the title. While this may be true, there was another team that lacked depth, and still was able to win the title—Manchester United.

Many will remember the period of the last season when Sir Alex Ferguson had to use youngsters like Jonny Evans, Rafael Da Silva and versatile players like John O’Shea, when his first-team starters Rio Ferdinand, Gary Neville and Nemanja Vidic were either injured or suspended. But still Manchester United won the title in the end.

So why is Arsenal being dismissed? That’s a team who has the same manager who took them to three Premier League titles, four FA Cups and all that happened not so long ago.

One thing should be remembered. This is football. Sometimes it defies logic, whatever that logic it might be.

Who could have known that Arsenal would complete a season undefeated.

Surely, the football pundits had not expected that. But it happened.

A new season of the Premier League has started. Twenty teams will battle for one title. No-one should be dismissed, especially a club that has won it in the not-so-distant past.
Posted by Unknown at 2:48 PM