The Greates Comebacks of the U.S. Open History, Part One 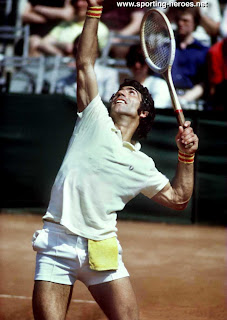 The time has come again, folks. One of the biggest four tournaments in modern tennis is about to resume on August 31st.

Throughout the years, the US Open has been a stage on which legendary tennis players like Pete Sampras, Roger Federer, Rafael Nadal, Bjorn Borg, Andre Agassi, Stefan Edberg and many more have attempted to eradicate to the word impossible from the dictionary.

They have been a great threat to that word, but nevertheless it still remains in the dictionary (but it has begun its transformation to its opposite—possible).

Tennis is not only an ordinary game of two players, two rackets, a net, and a ball. Tennis is much more than that; it is a reflection of the human strength and the unending potential of the human body and mind— the two reasons for which we have seen countless of comebacks in tennis.

The US Open has also had its fair share of great comebacks. But which ones were the greatest? Well, let’s look into it.

Here are the greatest comebacks in the US Open since the day the tournament was created from its predecessor, the US National Championship, in 1968.

It was one of the first comebacks since the tournament was created and it was one of the most dramatic ones ever. In front of a record number of attendance, 14,696, Romanian Ilie Nastase and American Arthur Ashe faced each other to decide which path the fourth US Open trophy will embark on.

The first set went to Ashe 6-3, but then Nastase tied the game, taking the second set with 6-3. The third was taken, once again, by the American.

In the fourth, Ilie Nastase trailed by two to one sets and 1-3 games at serving game. Eventually, he managed to turn it around and won it by six games to four.

The fifth and final set once again went to the Romanian, but not before he trailed again due to a break by Ashe. Ilie Nastase completed his first US Open triumph in one of the most dramatic comebacks up to date.

In the year when night tennis was introduced, the battle between the two was the one to make the perfect advertisement of it.

It was probably the greatest comeback ever to occur in the world of tennis. The Spaniard Manuel Orantes quickly lost the first two sets by 4-6, 1-6, but he managed to recover for the third and won it 6-2.

But it was in the fourth set when it was meant for people to suffer heart attacks. Orantes trailed by 0-5 games but, unbelievably, made a terrific comeback to win it 7-5: striking performance by Manuel Orantes. In the finals set he was able to finish off Villas, winning 6-4.

He later continued on his quest and beat defending champion Jimmy Connors in the final.

Pam Shriver caused the big upset by beating reigning Wimbledon and French Open champion, and her partner in the women’s doubles, Martina Navratilova. She managed to come back from 1-6 to take the remaining two sets 7-6, 6-2.

Unfortunately for Pam Shrivers, beating the top-seeded challenger could not help her win the US Open. Still, the match is considered to be one of the greatest in the US Open women’s singles.

The match between Stefan Edberg and Michael Chang is believed to be the longest match in the history of the US Open. It lasted for over five hours— five hours and 26 minutes to be exact. And what a test of endurance it was.

Edberg’s perfect execution of serve-volley and Chang’s perfect returns and passing contributed to one of the closest games ever in tennis.

In the first set, Chang took the lead with five games to two, but Edberg did not give up and fought back to earn a tiebreak. Eventually, he lost the tiebreak and the first set went to Michael Chang.

In second set, strangely enough, the script was the opposite of the one in the first set. Edberg took the lead with 4-0 only to see Chang come back to lock the game into a tiebreak again. Nevertheless, it was still Edberg that won the tiebreak.

The third set went to Stefan Edberg, 7-5. In the fourth, the Swede missed the chance to end the match and allowed Chang to push the game into a final fifth set.

It is when the battle for endurance became most obvious. Both were physically tired, the battle was led in the minds of the players.