Kolo Toure: There are no Leaders at Arsenal 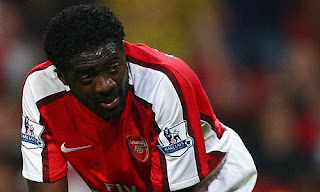 A week ago, Kolo Toure decided to join the quickly progressing side of Manchester City.

Giving his reasons for leaving, he stated:
“I came to Man City because when you look at Arsenal you see all the great players have left the club and are now in the past”

“Look at what has happened there. Thierry Henry has gone, Patrick Vieira has gone, Ray Parlour has gone.”

“These were the players that brought success to Arsenal and I believed it was right at this stage of my career to also move on.”

“We lost too many leaders at Arsenal. When we were winning the league title the spirit was fantastic, we were like a band of brothers.”
One of the main reasons he pointed out for leaving Arsenal was that City were doing what Arsenal should be doing; but it’s not:

“The best teams are at the top only because they have the best players and to get those players you have to spend a lot of money,” he said.

“You can't be successful in football without money. This is the football business. City have a project to build a big team and so it is natural it is going to cost money”

But if we look into what Toure said, we will find that there is another side of the story.

Kolo Toure has been at the club for eight years. He has experienced the influence of ex-captains of Arsenal such as Patrick Vieira, Thierry Henry, Tony Adams, William Gallas and Cesc Fabregas.

Surely, he must have solid grounds on which to compare the leadership of the different footballers.

Undoubtedly, at the moment, there is no one even close to possessing the leadership qualities of Tony Adams and Patrick Vieira; leaders like them are rare for any club.

But if we look into the current Arsenal team we will find plenty of players with adequate leadership qualities.

Tomas Rosicky, for example, has been out of the action for a year and a half, and he has returned to once again challenge his football goals.

Isn’t that the spirit of a leader - to never give up in the face of hardship?

There is another man at Arsenal that can serve as an even more adequate answer to this question – that man is Eduardo.

Few would have recovered psychologically after a career-threatening injury like his.

I will never forget the look on the players’ faces when they witnessed the consequences of Martin Taylor’s brutal tackle on the short Croatian striker.

Eduardo is back now, after more than a year out, ready to challenge again. Isn’t that another inspiration for the young Gunners?

Maybe what Toure really meant was that Arsenal lacked a leader who can motivate them on the field in difficult moments.

There is a player fits those requirements too – that player is Andrei Arshavin.

We have seen him to single-handedly turn around matches with his skill. His sheer presence is assuring to his team-mates. We have seen the positive effects of his presence in more than one match.

The same could be said about the young play-maker, and current captain of Arsenal: Cesc Fabregas.

Every year he matures more and more. He has begun his transformation as a leader, and every year he is getting even better at the job.

What about another Arsenal player - Thomas Vermaelen?

The new Arsenal signing was a captain of Ajax for the 08/09 season. He has proved that he has the leadership qualities and organisational skills needed by Arsenal.
So what did Toure really meant by saying that Arsenal had lost its leaders?

Did he mean that at Manchester City there are leaders like Henry, Vieira and Adams? (He moved there, didn’t he?)

I doubt it very much.

The real reason for his decision to leave, and it is not surprising, is money. As he clearly pointed out in his statement, the most successful teams are the teams who have the sufficient resources.

Maybe he is right about that. We see a confirmation of his statement every year.
Many players that have served a team for a long period of time, that have given a team their loyalty to a team, eventually leave to seek for greener pastures.

Thierry Henry also left; when he was at almost the same age as Toure too. He knew his career was nearing its end. He wanted to taste something different; but he never, at any time, showed disrespect towards Arsenal. For that reason, he remains in the hearts of the fans.

Kolo Toure is right about one thing.

Traditions are giving way to a more effective, but also more ruthless way: the way of monetary system.

The Arsenal fans cannot be angry with their last “invincible” for stating his opinion. They should not forget that he has given eight of his best years in football at Arsenal, and is entitled to his opinion.

Although, many would not agree with his opinion, including me; I wish him good luck at his new team, and with his career.

He will be remembered as one of the “invincibles” and as an influential player who has given a lot to Arsenal.

With his departure, Arsenal enters a new period: the post-“invincibles” period. A period of new success? Only time will show.
Posted by Unknown at 9:28 AM