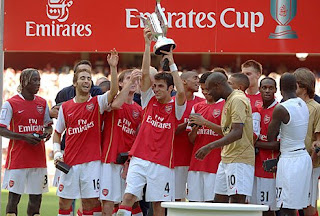 During the past four years the fans of Arsenal have become disgruntled by the way the board has behaved after not winning any trophies. The board of Arsenal has acted as they aim for something completely different than winning some much wanted by the fans trophies.

And the cold truth, and no secret to all, is that they aim for profit.

Arsenal is a business.

Even after countless statements made by the chairman Peter Hill-Wood, in which he explains how he loves the club, it is still run as a business.

Let me point out some of the things that become evident when we examine how the club has been run for the past few years.

Firstly, it has become not as important to win trophies to make a healthy profit. In a way this is an understandable tactic employed by the board since there is a global crisis going on in the world economics.

It has worked well so far and because of it Arsenal are in a stable financial position, not to mention that the club is still waiting to capitalise on its residential development of the old stadium at Highbury Square.

So the choices that were set before Arsenal were either to give in to those teams and concentrate on the long run, or allow a take-over and an influx of money from outside, which would have probably brightened the picture but only in short term.

The reason I say this is because we never know the next idea that may come to the mind of a billionaire.

Can you count on them for supporting a club forever?

Another thing that comes to mind is the sensible approach of the club in the transfer market. It has also been a trademark of Arsenal’s for the past few years.

The most notable signings that signify this approach are exemplified by those of Eduardo for the sum of 7.5m, Andrey Arshavin for around 14m, Samir Nasri – 12.7m, and Bakary Sagna – 6.1m. They are good players bought for a considerably small amount of money.

So how can that way of management of the club bring trophies to the club in the future?

If we compare the spending to teams like Real Madrid, Chelsea, Manchester United, and others it seems like Arsenal are only aiming to preserve a stable financial position. That would certainly leave the importance of winning trophies on a lower step in the ladder of priorities.

I cannot agree with that.

If you look at the big picture the truth is that Arsenal has also been going through a change of personnel on the field.

The last trophy that it won was the F.A. Cup in 2005, when the “invincibles” have already started to fall apart.

Since then the team has undergone a deep transformation. Only Kolo Toure has remained from the side that was the “invincibles”. But the manager is the same; the financial situation is getting better despite claims that it’s bad.

So, it could be said it is completely normal for Arsenal to go through a trophy-less period after it faces a change of generations and players. The reason I called the transformation a change of generations if that when you look into Wenger’s decisions in the transfer marker you will see the only player that he didn’t want to lose from the team and still lost was Flamini. The others were above 28 years of age.

But now Arsene Wenger, with a little help from the board, has built a new team. Although there are still more holes to be filled, the transformation is looking close to completion now.

The big plus is that so far no players have left the team for this year. With one or two more “sensible” signings we will be looking at a perfectly capable team of winning the Premier League and pretty much everything else.

Even though fans will remember those years as years of famine in terms of trophies, it cannot be denied that Arsenal has made progress.

You only have to look at the results in the strongest competition in Europe, Champion’s League, to consent.

Arsenal is getting stronger and the building of the team is near completion.

So why doubt them. Trophies are coming for sure.

There is a considerable amount of truth in what Arsene Wenger said: “We have to keep the belief and the trophies will come naturally.”
Posted by Unknown at 1:02 PM