Everton-Arsenal: A Preview of the Opening Day Match 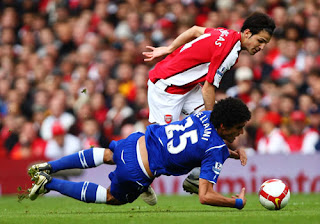 We have waited a long time for this. The Premier League football, along with its excitement and a world of its own, resume on Saturday, after a long, long summer break of drought, to start yet another season—2009/2010.

Arsenal has the difficult task of meeting last season fifth-place-finishers Everton. The match has a special value to it as a good start will boost the confidence of either of the teams.

Let’s look into both sides just before the sparks start flying on Saturday.

Arsenal is once again tormented by injures, but that does not quite surprise anyone. Tomas Rosicky, having sustained a hamstring injury, will be unavailable for the game. Players that will keep him company tomorrow are also Theo Walcott (back problem), Abou Diaby (groin injury), Samir Nasri (broken fibula), Johan Djourou (knee problem), and Lukasz Fabiansky (knee problem).

Although, many important players will still be missing, Arsene Wenger will count on the rest of his squad, which will include last season’s surprise-package Andrey Arshavin and team-captain Cesc Fabregas, to see off the first challenge of the season. They will receive the more than qualified help of Dutch forward Robin van Persie and the towering Nicklas Bedntner.

So, things look pretty even when it comes to the number of important players missing from the first team squads.

Arsene Wenger will probably use the dynamic formation 4-3-3 against the most-probable and more reserved 4-5-1 by David Moyes, which could easily turn out to be something else due to the absence of key players.

Some key battles that could decide the outcome of the match may form between Bakary Sagna and Steven Pienaar, Tony Hibbert and Andrey Arshavin, Cesc Fabregas and Maroune Fellaini.

Arsene Wenger has opted not to use young starlet Jack Wilshere in an attempt to take some heat off him. Speaking for the Arsenal’s website, he said:

“Tomorrow no because he is not in the squad but during the season, yes [he will be involved],”

“On one side people say ‘you are too young, you do not have enough experience’. On the other people say ‘why do you not play people who are 17 and win the league?” said the Professor.

”We are already very young and Jack Wilshere will play a part in our season, but not the whole season. He is 17 years old.
This is the eighth time that the sides meet in the opening day of the Premier League. The Gunners have lost only once to their counterparts on the opening day.”

Most notable goal scorers in the Arsenal side include Robin van Persie, who has netter four goals against Everton, and Eduardo who is shortly behind with two.

Everton has met Arsenal 176 times recording 54 wins, 85 defeats and 37 draws. The last win recorded by Everton on the opening day of the English Premier League was in 1970, when Everton beat Arsenal by 1-0 at Highbury.

The big question is can Everton sustain their form from last season in which they managed to record 15 clean sheets in their last 22 matches.

It remains to be seen.

It has arrived, folks. The Premier League football is knocking on your door. Open it. Tomorrow it all starts again.

Arsenal is meeting Everton on Goodison Park at 17:30 UK time. The first match of this season is to be played at 12:45 between Chelsea and Hull City.
Posted by Unknown at 4:30 PM