An Open Letter to Arsenal's Critics from Arsenal's Players 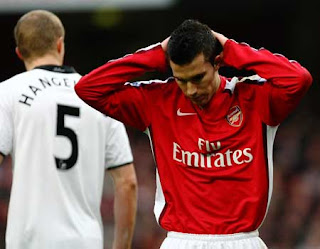 We are writing to you to apologize for our inappropriate behaviour in our march against Everton on Goodison Park. You must know that we respect you opinions very much, and we hold your rash criticism close to our heart, just in case we need it.

Our team captain Cesc Fabregas conducted a meeting in order to reflect on our terrible performance; we asked ourselves the question you are probably asking yourselves now: Why, oh, why did we win with a five-goal margin, away from home, against a side that finished fifth last season?

After a long discussion, we were able to come up with a few explanations of our own that we would like to supply to you. We hope that by doing so you will forgive us and understand that we have nothing against you; we love you, and we need you criticism.

Firstly, that little Samba-dancing Brazilian kid, Denilson, has never really listened to us. He is a kind of a quite rebel. We never would have thought that he would act against your most respected opinions dear critics. By the time we saw him preparing to shoot,we understood he would rebel. Before we attempted to stop him, the ball was already in.

It was Van Persie’s mistake really. He should have known better than to assist that rebel.

Secondly, we forgot that we had signed that Belgian ex-captain of Ajax, Thomas Vermaelen thus we also forgot to tell him that you wanted us to submit to your most-respected opinions. We should have lost, we know that, but unfortunately Vermaelen did not.

Theo Walcott was burdened with the task to tell that to the new guy, but he got injured and could not make it to the game. In Van Persie’s words, “I did not know he was there; I wanted the ball to go out, but the new guy jumped out of nowhere and scored.”

We felt so bad to have a two goal lead away from home. We were shocked and we would have never consciously thought that our ex-captain William Gallas would nod the ball in behind Howard. He later explained that he was still dazed by the second goal that we had scored earlier and because of that was playing on automatic mode.

We are so sorry.

At half time, we reminded ourselves that we were to start the season badly because that would make you, dear critics of Arsenal, feel good and all-powerful for identifying the quality that we possess. We love you so much.

We are very young, and we are still learning. Give us a chance to explain how it all happened and you will see that it was not really our fault.

It was that manager of ours.

He told us to constantly swap positions to confuse the opposition, and that the new formation, 4-3-3, or something, would work if we did that. Most of us are young, and we were confused, so did what we were told to do.

Leading 3-0 in the second half, we realised we had made an irreversible mistake. With great regret, we decided to see the rest of the game through, as the result was irreparable already.

We finished the match off with two goals by our captain, who by the way is leaving for Barcelona soon, and one by that injury-prone guy—Eduardo.

We did not mean to disappoint your expectations of us. We will try to make it up to you, dear critics.

Please proceed with your criticism; we will keep in touch with you.

Sincerely,
The Arsenal’s players
Posted by Unknown at 1:45 PM