Four Things We Learned Form Arsenal’s Defeat at the Mestaia 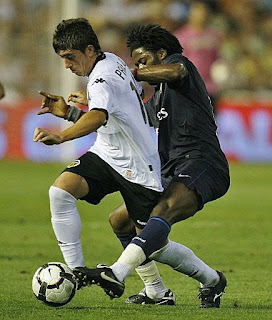 “The rain in Spain falls mainly in the plain”— the phrase proved to be right (well, almost, if we consider the “plain” to be the football field) last night at the friendly match between Arsenal and Valencia. The rain poured relentlessly over the heads of footballers and fans.

Arsenal lost that game, their last of the pre-season preparation, with the convincingly sounding result of 2-0.

Nevertheless, that is not the important part here.

It was a result in a friendly— a match that is used to test the side that you have at your disposal, and to prepare your players for the new season.

That was exactly what Arsene Wenger did. In the first half he fielded a much familiar to everyone side, although in a much unfamiliar formation.

And that is the first thing we learnt.

The formation that Wenger is very likely to use this season is 4-3-3. We saw him using it almost all the matches in the pre-season so far.

One of the distinguishing marks of this formation, and it is quite interesting as well, is that Nicklas Bendtner, who is the towering striker in the Arsenal squad, will be used on the right side of the attack (he played there in every pre-season friendly so far).

Moreover, Robin van Persie could be used in the centre, battling out his first-team spot with Eduardo. An interesting though is what will happen if both of them are on the field; rarely have we seen it. On the left, Arshavin and Nasri, when he gets well, could be used.

Furthermore, placing Van Persie on the left, could release the spot in the centre for either Eduardo or Bendtner.

Another interesting distinction in that formation is the variety of the midfielder combinations that Wenger could use.

Cesc Fabregas is definitely a first-team starter, but who will partner him in the centre of the park is entirely different issue.

Rotation among Denilson, Song, Diaby, Nasri, Rosicky, and Wilshere could be used by the Professor, and we have seen that in some pre-season games of Arsenal this year.

At the back, the choices are more clearly highlighted. There are four backs, among which Thomas Vermaelen and William Gallas are the clear favourites for first team spot.

Another thing, we learnt from the game against Valencia was that Silvestre and Djourou are not the best possible choice for the back-two in the centre.

During the second half we saw them missing a hefty number of cutting through balls, going in exactly between them. A lot of the troubles for Arsenal originated from there.

In addition, Johan Djourou has a slight problem with his positioning. Fortunately for him, he also posses the pace to correct the mistakes he is making. He is stable in the air, and has some pretty impressive tackling skills.

It seems like it is only a matter of time to see him improve more.

Another thing that we learnt was that Keiran Gibbs and Armand Traore, who are both left-backs, can play at the same time. How did that happen?

Traore remained on the left side of the defence and Kierran Gibbs took the more forward position in front of him.

That small trick looks like an adequate solution to keep on using Andrei Arshavin on a more forward position in the 4-3-3 formation. It remains to be seen if he young talented left-backs can improve to challenge for even more first-team football.

Finally, we learnt that Manuel Almunia will have to compete for his first-team spot with Lukasz Fabianski.

The 24-year-old keeper showed great reflexes to save a couple of solid shots toward his goal and made a terrific diving save to deny David Villa’s penalty shot.

He only let a goal near the end of the match when it was clear that he had sustained some kind of injury on his leg. Almunia is in for a run for his spot this season.

Now, Arsene Wenger knows what to do, what is missing, and how to use to the maximum of the available resources.
Posted by Unknown at 10:05 AM