The Greatest Comebacks in the U.S. Open History, Part Two 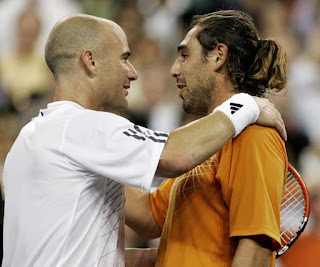 This is the second part of The Greates Comebacks in the U.S. Open History.

It only took 22 minutes for Steffi Graf to snatch the first set from Vicario, 1-6. But how wrong would she have been if she thought it was going to be an easy game.

Vicario fought back in the second set and at the result 4-3, having executed a half-volley saw Steffi Graf suffer some kind of injury while attempting to reach the ball. Nevertheless, Steffi continued to battle on with a slight pain in her lower back. Later, she claimed that the injury only bothered her for a couple of games.

In the final third set, Graf’s main weapon started to fail. She netted a few forehands and made some unprovoked errors. Eventually, Arantxa Sanchez-Vicario fought to snatch the win, took the final set 6-4, defeating Graf. It was her first US Open title. She said after the game, “It was the happiest day of my life and the biggest win,”

About the injury that Stefi seemed to suffer from during the match she said, “Well, I know she had a back problem. When I won the second set, I knew everything was different, but I thought she was still playing a good match.”

Steffi Graf, nonetheless, had no excuses for her defeat, “I just couldn’t stay with this level. That’s all”

The 1995 US Open witnessed one of the most memorable women’s singles tennis match in the history of the tournament. Two years after she was stabbed on court, Monica Seles was back in top form and was battling it out with Steffi Graf for the US Open title.

In a very dramatic, full of tension and jam-packed with great tennis match, Graf was able to turn the odds around in her favour winning 7-6, 0-6, 6-3.

In the first set, Monica Seles failed to capitalise on a set point and lost the tiebreak 6-8. In second though, it only took her 27 minutes to neutralize Graf’s tennis and tie the score.

However, Graf had a different opinion. At 1-1 games in the final set, Monica failed to take a break point leaving Graf to take full advantage of that, winning 6-3. The great comeback secured Graf’s fourth US Open title.

35-year-old Andre Agassi had a younger opponent, much stronger than him. James Blake’s hard-hitting shots and serves were enough to show the aging Agassi that he meant business, taking the first two sets 6-3, 6-3.

He couldn’t have imagined what would happen next.

In the third set, Agassi broke to tie the games, 3-3. He kept serve for 4-3 and then in the eighth game was when the turning point of the match developed.

Agassi fought to reach a break point, but failed to push further and deuce had to be played. Blake managed to take three advantages, but failed to capitalise on all of them. His nerves betrayed him and with three double faults from his serve, he surrendered the game and eventually the set, 6-3 to Andre Agassi.

The aging American made the turnaround complete and secured his progression to the semi-final, beating 25-year-old Blake 3-6, 3-6, 6-3, 6-3, 7-6. Great comeback by Andre Agassi.

John McEnroe described the match as the greatest ever to have been played in the history of the US Open. And it is easy to see why.

The match proceeded more than three hours and stretched to midnight. It finished at 12:27am.

In the second set, Henin-Hardene trailed by 3-5 games but recovered, winning the set in the tiebreak 7-5.

In the third set, she trailed once again by 2-5, but miraculously fought back to reach the tiebreak and eventually win one of the most exciting matches ever to be played in tennis. Throughout the match, Jennifer Capriate had 11 opportunities to finish the match off, but a resolute Justine Henin-Hardene refused to give up.

Later that evening, the Belgian tennis player was treated for muscle cramps and dehydration in order to play in the final the next day.

She defeated her country-woman Kim Clijisters in straight sets and was crowned US Open champion. But nobody would have a slightest degree of doubt which match was the real final in the 2003 US Open championship.

“You are not guaranteed these moments,” Agassi said after the game, “and to feel it out there is something I can keep in me forever.”

It was one of the last games of the tennis all-time great Andre Agassi. The 36-year-old once again stunned the millions of tennis fans around the world.

Cheered by a crowd of 23,700, Agassi strolled on to take the first two sets from his 21-year-old opponent. Contradictory to the expectations that Agassi would crumble physically first, it was Baghdatis’s feet that locked up. He had to receive help from his trainer. Falling on his wrist in the first set did not make things easier for him. But did he quit?

Through amazing will-power Marcos Baghdatis fought through a deficit of 0-4 games in the fourth set, and tied the sets at 2-2. Agassi’s wife Steffi Gras now looked worried on the stands.

But it was the old school’s calm and calculated tennis that was in favour tonight. Eventually, Andre Agassi won the final set 7-5 to record one of the most exciting games of the US Open men’s singles history.

He was later greeted by a crowd of fans in his locker room. In the next round he was to meat Benjamin Becker, which would later be looked backed on as his last game in tennis.
Posted by Unknown at 11:23 AM