At Arsenal, Robin Van Persie has Undergone a Significant Transformation 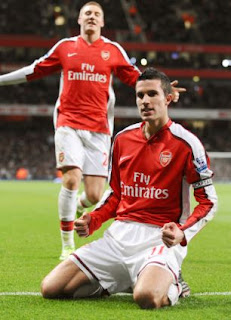 A month ago, Robin Van Perise dispersed all doubt that he was leaving Arsenal, when he signed a new five-year contract to keep him at the club until 2014.

The skilful Dutch forward turned down offers from clubs like Chelsea, Juventus, Manchester City and their city rivals Manchester United.

Before signing the contract, Robin Van Persie had set a number in his mind, that number was the wage he felt he deserved - £80k.

However, he agreed to sign a new contract with a wage of £70k per week.

Surely, this is a sign that the player does not want to leave and is fully committed and happy to stay at the London club.

The thing is that a club like Arsenal really needs a player with his skills and not only that, but it has also come to need the personality of Robin Van Persie, a personality that has gone through a significant transformation since he joined the club.

In his first season at Arsenal it became evident that Arsene Wenger has signed a player with extraordinary talent. Unfortunately, like in many other cases, his talent was accompanied with some negative sides.

One of the most obvious problems was his selfishness on the field.

In a team like Arsenal where the team effort is put first, such individual displays are not usually the best solution to maximize the effectiveness of the attack. Van Persie’s failure to comply with that rule did him no favor in the beginning of his career at Arsenal.

On top of that, it became evident that Van Persie was an injury-prone player. He suffered a number of injuries throughout his years at Arsenal which put him aside from the action for a long period of time.

He also had difficulties with keeping his discipline in tact, resulting in a dismissal against Southampton in his first season at the London club.

To make things worse, Robin also experienced difficulties outside of the football field. He was arrested in 2005 upon suspicion of rape of a Dutch beauty queen. He was eventually released from jail, with case being closed due to insufficient police evidence.

In contrast to all the problems he had, Van Persie has undoubtedly transformed for the good to become a different player and man.

It cannot be denied that he has benefited from the good influence of the people in the club, of Arsene Wenger, of ex-captain Thierry Henry, and of his countryman Dennis Bergkamp.

A solid proof for his positive development can be found in the examination of his statistics on the pitch.

Van Persie’s performances on the field last season made up his most successful season for Arsenal so far. He became the club’s leading goal scorer, winning the fan’s Player of the Season award.

He managed to score 11 goals in 28 matches, remaining uninjured for most of the season. It is a sure sign that Wenger has found an effective way to deal with Van Persie’s proneness to injuries.

Nevertheless, the most significant highlight of his transformation has to be the change of his style of play.

On the field during the last season, Van Persie was not the same selfish player who had joined the team in 2004. He combined with his teammates, did not hold the ball for unnecessary long periods of time, and contributed a lot the team’s build-up play.

Eventually, Van Persie finished the season with 11 assists, a number of assists which was only surpassed by the team’s play maker ¬– Francesc Fabregas.

Another big transformation that Van Persie has undergone was his change of attitude towards the club. He has fallen in love with Arsenal and he has had not fear of openly expressing this love.

He recently stated that he had signed the new contract because he felt he had received the respect he deserved from the club. After signing the contract, Robin spoke in the club’s website:

Undoubtedly, there is a lot more yet to be seen from the Dutch technician but there is one thing for sure. Robin Van Persie has embarked on his long road to becoming an Arsenal legend.
Posted by Unknown at 5:35 AM