The Diary of a Football Fan: Summer Contemplations 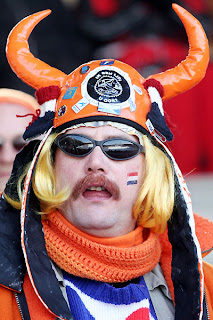 Every year the football fan dies, only to be reborn once more after a short period of time – usually two to three months.

For the ordinary man, the summer is the best season of the year - the season when one rests from every-day life.

Just think about it: mohitoes, bright sun, palms, Latino music, time off work, beautiful things everywhere you look at, and water, lots of water.
How could you not wait for times like that?

Surprisingly, a special breed of people exist that scorn this season of the year - the football fans.

These people have spent their year watching matches, discussing them with their friends, and going through the rollercoaster of emotions that the football game is. It has become a way of life for this special kind of people.

Now you understand why the football fan hates the summer. How could he not?

There is no football. What is he a fan of then?

He is just a man, or a woman, ordinary, like all the rest; but not quite as ordinary.
In the morning the football fan wakes up, gets out of the bed, goes to the desktop computer and switches it on, then returns to the bed to lie for a couple more minutes. Then rises up again, sits in front of the computer, and logs into his accounts on bleacher report, and his e-mail.

The next thing he does is to visit all the sites that are relevant to him: his favourite club’s site, and the newspapers’.

He browses for a couple of minutes, checking on the latest news, hoping to see a new transfer singing, just as he has seen it in his head the day before. Then he makes a coffee, which is only an excuse to keep browsing for another five minutes, dresses up, and goes to work.

Of course, at work, the football fan rarely thinks about work. He thinks about football, doing everything automatically, only focusing on the work at hand if it is really necessary.

Who is his favourite team going to sign next? Won’t that be the solution to solve the team’s problems?
He fast-forwards the remaining time to the first match of the season. He imagines the atmosphere on the stadium.

It is a bright and shiny day. People wear smiles on their faces. Everybody is talking excitedly. The teams come out of the tunnel. The crowd roars; an array of ornaments and balloons spring up in the air above the football field.

Then, he is rudely interrupted and brought back to reality. Something is not working properly. Who cares?

He goes on to repair it, smiling cryptically.

The football fan knows there is a match today, a match of his favourite team. It doesn’t matter that they play against a team that he and his mates would probably beat if they wished.

He knows he can watch it online.

He leaves work earlier than usual, says goodbyes to his colleagues and heads home. When he gets there, he murmurs a greeting under his breath while passing by his girlfriend, goes straight to the computer, and switches it on.

The morning procedure is repeated. This time without the coffee - no excuses are needed.

The match has started. He is excited – like when he was when watching the Champions League final.

He yells and gestures, falls down from his chair – his team has scored.
The football fan in him is happy. He lets his thoughts drift toward the first whistle of the new season again. A happy moment, and it’s coming – only three weeks to go.

Bloody summer!
Posted by Unknown at 10:56 AM