A fan of...It is Time to Choose 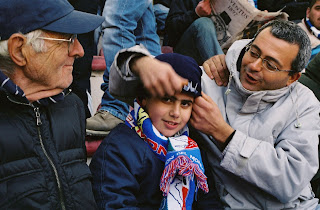 What does make a man choose which club to support? People, who like football, can enjoy it without being a fan of some team. Why do we choose a team to support then? How do we make that choice?

Those are simple questions and I’m sure all of us have our own simple answers to them. Generally speaking, it is a choice made subconsciously by most of us. Has that happened to you?

You saw a team playing and you liked their kit colours, or their style of play appealed to you, or there was just something about the atmosphere on the stadium that you liked, or the team was very successful and famous. There are many different reasons that could tempt us to support a football team.

I’ve heard of many different stories as to why and how people have chosen the teams they support. A friend of mine made his first steps of becoming a fan of Manchester United while we were playing the new, at that time, game FIFA 97.

He was wondering which team to choose, and of course as the good friend that I am, I immediately suggested the Red Devils. “Pick these guys they are good.” I told him. He’s been making my life miserable, every time Manchester wins the League, since then. Why, oh, why didn’t I offer him Bolton for example, or Hull City?

And another example is my cousin who, due to the reason that I am an Arsenal fan, decided to choose the Red Devils as his favourite team for the sole reason of annoying me.

Funny as it sounds, the smallest of the reasons can drive us to make a decision that could influence out lives. Even the most insignificant of reasons which out decision was based on can have bigger consequences than the ones we thought they would have.

To tell you the truth, the reason I become a fan of Arsenal was based on my previous fondness of the Dutch side Ajax. The team had red and white kits. Needless to say that Arsenal has very similar kit colours. Once, while browsing the channels on TV in 1996, I saw a team with red and white colours on their kits and I, immediately, found them appealing. I would have never thought that such a small reason would make me the fan of that club that I am today.

Of course, that does not matter to me anymore, as I’m sure for you as well. My love for the club grows stronger every day. My perception of it is much changed, and expanded. It has become and obsession for me. Arsenal FC has become an institution with witch I identify myself with.

Isn’t that why we all have favourite teams? Maybe, we see a tiny bit of ourselves, our personalities, in those teams. Maybe, we’d like the teams that we support to remind people of us when they see them.

We all have our reasons to make the choices we have made, even if those reasons sound so insignificant now. Some decisions have the potential to change our lives.

Why do you support your team?
Posted by Unknown at 2:37 PM