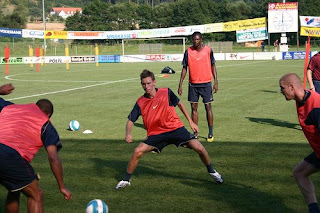 The pre-season preparations of Arsenal in the Austrian training camp are continuing as planned.

On Tuesday, Arsenal trounced third-division Austrian side SC Columbia in their second friendly match of this year’s pre-season preparations.

However, two familiar faces were missing from the squad for this match: Tomas Rosicky and Eduardo.

Tomas Rosicky took part in Arsenal’s first pre-season friendly against Barnet and it came as quite a surprise that he was missing from the line-up for the match against SC Columbia.

“Rosicky played on Saturday but we allowed him to rest after that, as he had not played for 18 months. He will play on Monday.” - Arsene Wenger explained on the club’s online TV.

The same goes for Eduardo. He will also be featured in the line-up against Szombathelyi H. on Monday.

Despite the extreme temperatures, in excess of 30 degrees Celsius, the team looked intense and motivated. Arsenal’s centre-back Johan Djourou shared his opinion on Arsenal TV about the current status of the squad.

“I think there was a real hunger in the squad because like the fans, we are disappointed with how things went at the end of last season.”

“We live for the club. We wan to win trophies and of course, we are disappointed that it hasn’t happened.” Djourou said.

“We are hungry for success, and you can see that in training. Every one is really focused, and they are getting ready for the start of the season.”

Meanwhile, Robin Van Persie expressed his regret that his team mate Samir Nasri sustained an injury and will be out of action for two months.

“I thought it was a bit sad for him and, of course, for us, because he is a good player for a couple of months.”

“But in football you just have to move on. It is hard because I will miss him for the first couple of months.”

“Hopefully, he comes back really soon and in a good shape as well, because it’s a nasty injury.”

“He played over 40 games. He was a regular so I will miss him, and everybody will miss him. He is a good player who can play on five, six positions.”

On Monday, Arsenal takes on Hungarian team Szombathelyi Haladas in their third friendly match before the start of the new season. Last year, the match finished in a draw: 1-1
Posted by Unknown at 4:11 PM