Is it Time That Arsene Wenger Changed His Policy at Arsenal? 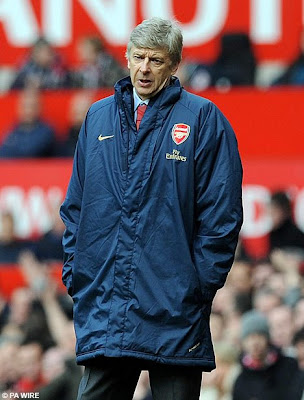 We all know what Arsene Wenger’s philosophy about football is. Arsenal FC epitomizes it. He has put it to work in this team. But isn’t it time that Mr.Wenger changed his ways?

Arsenal is struggling to perform nowadays and it’s hard for the loyal supporters to stand aside and watch helplessly as their team suffers.

Through the years the fans have witnessed both good and bad moments. The “Gooners” have been with the club through thick and thin but in the end they could say that there had been mostly good years.

From 1996 to 2005 (the year that Arsenal last won a trophy) the Gunners have won 11 trophies and have enjoyed one of the best, if not the best, periods in the history of the club.

Arsene Wenger is one of the major reasons for this to happen. He is widely respected by the Arsenal fans. His philosophy and ideas have transformed the club forever, and in no way we can say for the bad.

But the question here is can Arsenal continue to walk along this romantic path? It was all a beautiful dream, but in the world we live in there is hardly time for such things and it had to come to and end sooner or later.

The teams in the Premier League have adopted much more pragmatic ways to gain points. Arsenal has become predictable, getting drawn or beaten even by “lesser” teams, if you can call them this that.

Stoke City, Hull City, W.B.A, Wigan Athletic, Portsmouth and many more teams who usually fight for survival to stay with England’s finest have succeeded in finding the right formula for stealing points from the “big four”, and it is what most usually happens with Arsenal.

There is no time for the romantic and artistic souls in the world of our time and they are very often ruthlessly rejected. Pragmatism and results are expected, especially in a business that involves millions of people and billions of pounds. Tolerance for sentimentality is gradually disappearing.

So isn’t it time that Wenger considered an alternative to this romantic belief of his and started adopting new methods that would give better results?

It’s a question that is asked by many. The answer may be different for different people.

In my humble opinion, Arsenal must adapt to the change that has happened. It is not the same any more. The world has changed, and along with it football as well, and it will continue to do so. The team that remains most capable of adaptation would succeed. Certain theories of Darwin come to mind…

Let’s pick Manchester United for example. They have had the same manager for over 23 years; nevertheless they continue to be a successful team.

Is it because of that manager?

No doubt about it. But Alex Ferguson has succeeded in finding a way to adapt to the game. Leaving his managerial genius aside, he has also changed something in order to adapt.

Even after a change of ownership, Manchester United has remained a dominating force on the English and European football scene.

Of course, they have had the money to buy the players needed due to the fact that they have led a good financial policy. Ferguson has never had any problems with money. That is not to say that he has adopted the policy of Real Madrid for example who run after every rising star they see.

So, coming back to my main point, is it possible that Arsene Wenger has stuck to his unyielding belief that young player can bring success to the team for a little longer than needed?

He has even broken one major rule in life (not only football). And that is the rule of the cooperation between the experience of the old and, enthusiasm and talent of the young. Maybe this is why Arsenal has failed to impress this season.

Firstly, it must be noted that there is no apparent leader in the squad. An experienced leader is much needed in every case and aspect of life, and especially in Arsenal’s case.

Why has Arsene Wegner failed to perceive that? It is simply beyond my understanding. He persists on using his young players to win trophies. Maybe some healthy self-analysis and self-criticism is needed here.

In addition to that, Wenger has refused to change the tactics of the team, concerning their performance on the field. In this way they have become predictable and many teams have taken advantage of that the last couple of seasons, stealing valuable points from Arsenal.

Perhaps it is time that Arsene Wenger changed something in Arsenal just as he managed to change the team more that 13 years ago.

“In Wenger we trust”. Please, Mr. Wenger, don’t play around with that trust.
Posted by Unknown at 2:42 AM