Arsenal: Tweaks to Defense Is the Key to Long-Awaited Title Glory 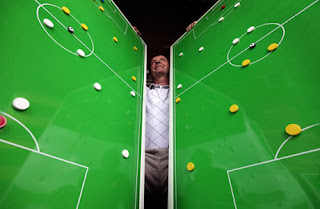 “Titles are won by the defense” said Tony Adams, Mr. Arsenal, in an interview earlier this year. Actually, he is not far from the truth.

While there are a lot more other factors that could contribute to a successful football campaign, history has backed his statement more than once.

Last season, the team with the second-best defense, but nevertheless with the best attack, snatched the precious silverware.

As you can see, a big factor for winning what seems to be one of the hardest competitions, apart from obviously scoring more than 90 goals, is to concede less than 30 goals.

That, however, looks beyond the currently drowned in trophy-drought Arsenal.
Why you may ask? Well, because Arsene Wenger’s team is still a few steps away from being complete.

While the men carrying the red badge showed enviable skills in attack, they somehow failed to curb the goal galore at the other end of the field. Since the famous “Invincible” season which the Gunners finished without suffering a single defeat, they have performed under the requirements set by their own genius.

But before pessimism envelops us, we must remind ourselves of the transition that Arsenal has been going through since that undefeated run in 2004. The erection of the new Emirates Stadium undeniably delayed the rebuilding of the squad due to financial issues, but also opened new doors for further development.

Now, Arsenal is gathering the fruits off the tree that was planted four years ago (Emirates Stadium was opened in 2006). Things are slowly returning to normal, and although the team is still incomplete, it is in no way far from it.

Wenger has managed to put together a squad capable of inflicting deadly damage to any opposition. But that has not been enough, and the French tactician knows it. The time has come to smooth out the defense.

Following consistent good performances by the two, Arsenal’s carefree life at the back was cut prematurely short by an injury of William Gallas which uncovered the insufficient defensive depth.

That shook the defensive stability, and eventually Arsenal finished the league third, having conceded 41 goals in the process.

A fast forward up to now, and we see that little has been done to alleviate this pain.

An exodus of experienced, but considered by some unfit to play due to their age, defenders has occurred.

William Gallas, Philippe Senderos, Sol Campbell, and Mikael Silvestre bid their farewell to the Arsenal cause. The signing of Laurent Koscielny has put the fans’ minds to rest for a while, but certainly more needs to be done to avoid a repetition of last season’s scenario.

And I’m not saying this only when considering the defensive depth of the team. With one more defender, the depth will be sufficient, and if not, the problem will possibly be delayed up until the winter transfer window.

The thing is that the defender needed must be the right one.

At the moment, Arsenal has three capable and of similar mould central defenders: Thomas Vermaelen, Laurent Koscielny, and Johan Djourou—all of them posses pace, strength, and good positioning. This type of defenders would fit perfectly well into the dynamic style of play that Wenger is obviously trying to implement.

The facts are that Vermaelen has the tendency to go forward, Djourou has been tested as a midfielder in preseason, and Koscielny is still adapting, so we must wait a bit for him.

Their speed supports the dynamism and allows them to go forward when set pieces are involved. If the attack is unsuccessful, for example, they can hurriedly track back to prevent any damage from counter-attacks.

Add Song, who can also track back to help them defend, and things look bright on paper.

So far so good, but what lacks is dependability—a defender that does all the little seemingly insignificant things and stays responsibly back at all times; a tall defender preferably with above average speed and very good positioning. Not someone to organize the defense, but someone who is stable and consistent at doing his defensive responsibilities; someone in the mould of Steve Bould, for example.

This way the other defenders will feel safe to contribute to the attack of the team.
The only one I can think of, and that Arsenal have in the current squad, is Johan Djourou. He fits the bill, but his injury proneness might create headaches as the new season starts.

A good way of dealing with this problem is by buying one more defender of those depicted qualities. If Le Professor does that then the team would be only one step away from completion—and that would be the goal keeper step.

With the new fascinating emblem that the Emirates Stadium is, the leverage has drastically multiplied, and as time passes by it will continue to do so.

Let’s just hope Arsene Wenger will listen to the advice of one of his ex-players, Tony Adams, and will put the final brick into the defensive wall.

You never know, the title might be one central defender away. Just the right one.
Posted by Unknown at 9:06 AM