Szczesny and Mannone: The Pill for the Goalkeeper Headache 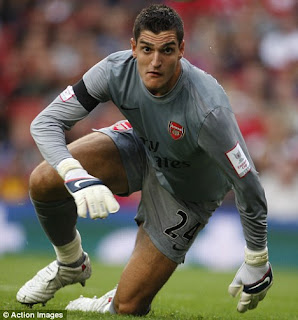 Amidst tons of expectation from the fans and Arsenal supporters, the holder of a Master of Science in Economics – or dare I say Master’s in Economy— Arsene Wenger has to find the solution of what seems to be turning into a long-time problem—the one of the goalkeeper.

The last couple of seasons have been all but a fairy tale for Arsenal when it comes to this position.

Many hope that the numerous blunders from the two first-team favorites, Manuel Almunia and Lukasz Fabianski, will force Le Professor to rethink the situation.

Wenger just might be looking to solve this problem during this year’s summer transfer window.

Tons of words have been written about who might be the right man for the job.

It has all been speculation so far.

The problem proceeds to daunt the idealistic minds of the fans.

Something has probably escaped us.

Arsene Wenger has always been known for sacrificing a lot to give a chance to upcoming youngsters.

All of the above suggested goalkeeper, with the exception of Mark Schwarzer, would serve the exact opposite of what Wenger stands for.

Almost all of them are bellow the age of 30. That means that by buying either of them Wenger will be obstructing the development of the two talented and young goalkeepers Wojciech Szczesny and Vito Mannone.

Last season, Mannone managed to record five first-team appearances, most mainly due to the injuries of Manuel Almunia and Lukasz Fabianski.

He served the team very well. At times, he even looked more stable than Wenger’s first choice in front of goal.

During most of his season though, the young Italian goalkeeper played for the reserve team where he went from strength to strength, showing obvious signs of speedy improvement in the process.

Despite being very young, Vito has managed to demonstrate great maturity and promising skill, leaving him with only one visible down point, his inexperience, which is the only factor keeping him away from the first team spot.

The other option Wenger has is the Polish talent Wojciech Szczesny.

Much could be said about the young footballer.

He spent a fruitful loan spell at Brentford, managing to impress many with his high-quality performances in the process of 18 appearances for the club. His Arsenal youth-team displays drew countless praises from youth coach and Arsenal legend Steve Bould. With suitable qualities like authoritativeness, quick reflexes, and great off-the-line intuition, Szczesny simply cannot be dismissed for the first team spot that easily.

Presented with those two gems, the French manager will have a brainstorm on his mind as to whether he really needs to buy a goalkeeper from elsewhere. Both of the youngsters have expressed their inextinguishable desire to play a role for the Arsenal first team.

Recently, Szczesny stated on the official website that he is willing to stay at the club for the new season rather than to leave on another loan spell. If this doesn’t show he is ready for first-team football then I don’t know what will.

In the midst of all the endeavors for improvement, Wenger is presented with a pill to alleviate his goalkeeping headache.

Could it be that that the key to the chest is so near that he cannot see it?

Buying any of the aforementioned transfer-linked goalkeepers will discontent the future world-class keepers Arsenal already possesses in their ranks.

With the right guidance, they will be world-class.

One of the choices, however, seems fitting in enough. And it has come as a surprise to many why Arsene Wenger was even considering the signature Mark Schwarzer. His presence in the club could buy one more year in safe environment for Vito Mannone and Wojciech Szczesny to develop.

They are certainly on the right track.

Will Wenger buy them time or will he lose them by buying a young long-term goalkeeper? Time will tell.
Posted by Unknown at 4:50 PM