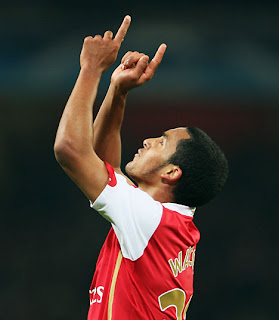 Another season has started and yet again the unrelenting sea of questions floods our minds: What has been done to improve the team’s fighting chances from last season? What has been improved?

Major or minor changes, one thing is certain: the team is not the same as last year.

Watching those matches last season, not once or twice sympathizers of Arsenal shuddered at the thought of losing either of the two first-choice defenders—Thomas Vermaelen and William Gallas.

And how wouldn’t they? Just a quick peek at the available options sitting on the bench was enough to perceive the inadequate defensive depth.

The unused Senderos left the club along with three other over-30 defenders—Gallas, Silvestre, and Campbell.

In their shoes stepped Laurent Koscielny, Djohan Djourou—who missed the whole last season due to a serious injury—and the recent acquisition Sebastien Squillaci.

While a quick glimpse may reveal that this has done absolutely nothing to ease the depth problem—four out, two in—this conclusion would be nevertheless deceiving.

William Gallas has been directly replaced by Sebastien Squillaci. Both are experienced enough and with somehow similar characteristics.

Sol Campbell and Michael Silvestre have been replaced by Johan Djourou (who can be considered a new signing) and Laurent Koscielny.

As you can see, the ratio has changed: three out, three in. Meaningless to say, the incumbent defenders are much younger, and so possessing the needed pace to deal with the high Premier League’s tempo.

The midfield was top class last season. Inspired, they created goals, scored them, and had wide variety in their game. Hardly a lot could be done to improve this further. But it has.

Keeping Cesc Fabregas was the main event that ensured the safe environment for the younger players to develop in stayed intact. Securing the main holding block is not the only positive outcome of this summer though.

Youngsters such as Jack Wilshere and Theo Walcott have improved tremendously, despite what most critics say about them.

Wilshere was awarded his first ever international call, and Theo Walcott hinted for his world-class potential by scoring a hat-trick against newly-promoted Blackpool.

These are sure signs that Wenger has two upgraded options at his disposal for this year’s Premier League battle.

On top of that, the influential Thomas Rosicky’s return from injury is a further moral boost for his team-mates. Add to the picture the overt signs that Samir Nasri is getting used to the English way of football and the future looks bright.

Although little has changed in the forward ranks, reasons for smiling are not totally absent. Having let go of Eduardo, Wenger has acquired a physically strong striker with great heading abilities in Maroune Chamakh.

This exchange could be viewed as an improvement since, unfortunately, Edu looked as he was not able to shake off his horrific encounter with Birmingham’s defender Martin Taylor a couple of years ago.

At the beginning of the last season, Arsenal started well and strolled to the top of the table. This was partly due to the form that Robin van Persie was in.

However, after he received an injury during an international friendly match with his country, the Gunners started struggling to find goals. With a little more luck this year, the Arsenal goal-making machine will stay fit which could be exactly the dose needed to cure the title-drought disease.

It’s a mistake to consider a player stays at the same level of quality every season.

This is exactly the case at Arsenal, especially with the young footballers.

And they continue to do so.

Since last year, we have seen signs of growth and that shouldn’t be discounted. Alex Song transformed into an important first team player and will beyond doubt continue to develop.

Similar is the case with Theo Walcott. The short quick striker was used predominantly on the wing as part of his development process. Against Blackpool, we saw him efficiently swapping positions with his attacking partner Maroune Chamakh which only hinted how deadly Walcott can be in the centre.

Nicholas Bendtner also proved to be on the right track last year. He more than adequately played the role of a lone striker when no one else was there to do it.

Arsenal are not the same team as last season; that should be clear. Improvements which seem minor at a first glance are actually huge steps towards the completion of the team.

Arsene Wenger wouldn’t have signed another contract if he wasn’t sure of that.

With a little more luck, the seed that was planted years ago, that grew into a young tree, might grow into a strong, unmovable oak.

And the sea of questions floods our minds again, only this time it is: How will these improvements help? Is the team ready at last?
Posted by Unknown at 12:29 PM