Arsenal: Four Things We Learned From the Gunners' Visit To Anfield 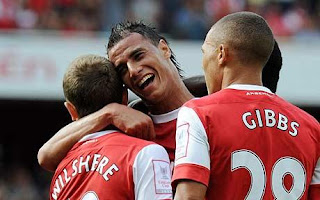 he first brick of Arsenal's newest Premier League campaign was laid yesterday in front of a uncomfortable crowd of Liverpool fans jam-packing the mythical Anfield. The match was going to be tough and all the players and managerial staff knew it.

As the game progressed, an image, differing from the one pundits and fans had in their minds, began to form.

With a pretty evenly distributed arms between the two teams, the skirmish finished in justified stalemate, 1-1. The boredom of the result was dispersed by the affairs that unfolded in front of the- content-to-see-the-beginning-of-the-new-season football fans.

Four events, especially, pointed the direction of a truth-seeking gaze – truths that may just well lead to repairing the past mistakes or foretelling the outcome for the teams and new season.

After Wenger's statements in early preseason preparation, it was hardly surprising to see that two of the most important players for Arsenal were not going to take part in the season opening game at Anfield. Leaving Robin van Persie on the bench, and team captain Cesc Fabregas completely out of the squad, Arsene Wenger stayed true to his intentions to give them a good rest after a tiring World Cup.

At times, despite the creative flair of Samir Nasri, and Andrey Arshavin, the Gunners looked unimaginative and dull. Simple short passes and persistence through the centre, especially in the first half, painted the picture of a team trying to keep possession but lacking sharpness to capitalize from it at the same time.

The final touch was missing. The distributions to the lone striker upfront were predictable and easy to deal with for the experienced Liverpool backs.

Someone with vision was missing to wreak havoc in the Liverpool defense with a well executed through or high balls. Someone exactly like Fabregas.

The team needs him, for his absence was once again felt on the field. Despite grabbing a valuable point in a difficult encounter, the staff must work throughout the season to ensure that the team will not fall into the void of relying on a single player.

Arsene Wenger is known for his accurate assessment of talent and right qualities when looking for possible team-upgrading players. Maybe he has succeeded in doing that yet again.

Maroune Chamakh looked like exactly the type of weapon Arsenal needs for its attack. His energy and fearless commitments to clashes provided another dimension for the Gunners's game. And in one such case, it proved to be crucial for the final result.

Maroune lurched forward to meet Pepe Reina for a 50-50 ball, won it, and following Reina's mistake, evened the result near the end of the game.

The other signing, Lauren Koscielny, also put up a good official debut. His performance was tainted only by the second yellow card he received in injury time.

Near the end of the first half, he felt what was like to play in the Premier League when new Liverpool addition Joe Cole made a committed tackle that missed the ball, landing on the French defender's right leg.

If it hadn't been the protecting pads, Koscielny's career at Arsenal could have been brought to an abrupt setback. But he found strength to go back and finished the game with a resolute facial expression.

While it's too early to conclude whether the new signings are a success, they must be credited for their good start. “A piece of English football; we are not afraid to taste it.”


The Gunners Face a Familiar Season of Pain Yet Again

The excessive use of force to disrupt the technical game of the men clad in red and white has turned into something of a trade mark for the opposing teams. And how can you blame them? It has worked miracles so far with its efficiency.

The tactics look bound to stay the same this season. A single game has passed, and we already see the signs of concern.

Joe Cole's tackle on Lauren Koscielny and Steven Gerrard's sweep on Maroune Chamakh are just the beginning. The Arsenal players have to toughen up in order to deal with this problem. But that is not the only solution.

The referees must be more strict and able to differentiate between commitment and just pure ill-intended aggression. Something they have failed to do on numerous occasions in the previous years.

One thing is certain: the Gunners will have to test their pain threshold once again, and hopefully, this time, they'll come out on top with no major casualties.

Scoring Goals Out of the Blue Can Make the Difference

We all know that the difference between a good team and the champion is that the champion will score important goals even when they do not deserved to. How many times have we seen Manchester United or Chelsea play bad and be victorious?

This is exactly what happened with Arsenal on Saturday.

That's not to say they didn't deserve the draw, but they were certainly heading for a defeat had it not been the lucky Chamakh intervention that lead to the mistake of Pepe Reina.

If Arsenal can sustain the spirit they showed against Liverpool, luck just might turn the tide this season.

One game – a tough one – one point. It's not what someone would call a disappointment.
Posted by Unknown at 12:32 PM