Dissecting Arsenal and Barcelona: What to Expect at Camp Nou 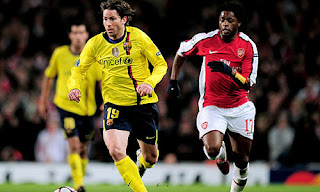 What a memorable night for football Wednesday night was. Both teams, having similarities more than differences, produced a feast for the eyes on this Wednesday night. Drama, in all its forms, entertained us—the beauty of football, just the clean sense of it, glued the eyes of millions glued to the TV screens.

Barcelona showed once again why they instill fear into their opponents, with this style of play, players, and coach. Chelsea and Manchester United will nod their heads in approval when I say Barcelona is drop-dead dangerous.

However, they will have to overcome an underestimated the young yet, I have to say, experienced side.

Arsenal will have their share of problems, but Barcelona will too. What are they exactly? Here are a few of them:

Andrey Arshavin, the Russian magician, will probably miss the highly-charged return leg in Spain. Arsenal’s captain Cesc Fabregas will also miss it, along with injured first-team choice William Gallas. That, with the fact the Arsenal’s most dangerous striker Robin Van Persie will be missing, restricts the choices of Arsene Wenger to zero.

No one from the Gunners’ camp would like to see the one dimensional Arsenal that this lack of first team players may cause at the Camp Nou. It will only make life much easier for the Catalans—and they would love that.

On top of that, the vulnerability of the Arsenal defense was exposed by Barcelona—those long balls proved too hard to decode for Alex Song and Thomas Vermaelen.

The fact that the partnership is likely to be the same for the return leg raises the question just how much work do Song and Vermaelen have to do before they reach the level of understanding that existed between the Belgian and Gallas? Zlatan Ibrahimovich’s two goals will certainly ring the alarm bells for Wenger and the players and will push them to improve their game and mutual understanding in training.

Barcelona, similarly, will miss both their first-team starters at the back: Gerard Pique and Carles Puyol, hardly a problem you can easily disregard.

The hopes of Arsenal are raised even more by other significant factors.

Despite the razor-sharp attack, Barcelona is vulnerable in the air, as we all saw. The absences of the short Arshavin and Fabregas may prove to be not as important as initially thought.

What matters, and key to exploiting that specific weakness of the Catalans, is the availability of the good headers in the team: Thomas Vermaelen, Nicklas Bendtner, and Abou Diaby. If the team plays a well-organized game, at the back, with precise execution of the crosses aimed at those exact players, and efficient use of set pieces, they might just snatch it away from the current cup holders.

Another potential problem-causing issue for Pep Guardiola’s team is their weaker physiques. We all saw how they pushed themselves to the limit until the 70th minute at the Emirates, and then they crumbled. I would argue the reason they conceded the first goal was more due to fitness than to psychology.

The team’s physical energy limits were drained due to their incessant attempts to win the ball and keep it in their possession. Every time when Arsenal won the ball, or attempted to make a counter-attack, at least three Barcelona players were at them, trying to close them down, and win the ball back.

While being a very effective part of total football, this tactic is very tiring to the players.

Wenger ingeniously kept the extremely quick Theo Walcott for the closing part of the game when the players clad in yellow were beginning to breathe heavier. The potential choice for the England national side was a big pain for the Catalans, ripping through the left side of their defense like knife through butter. The England manager, Fabio Capello, who was watching the match, must have been impressed.

If Arsenal manages to keep things at status quo until 60th, 70th minute favors might start to turn their way in the final period of the game. Of course, the result from the first leg will complicate things a bit as they will have to score to proceed to the next stage, but as the young Gunners have proven with this stunning comeback, it is not out of their reach.

Barcelona are the clear favorites. Arsenal has much to avenge for against this specific enemy, but it will not be about that this time. It will be about proving their worth against probably the best team in the world at the moment.

After Wednesday night’s performance, which is just the tip of the iceberg of a long and strenuous work, it’s a safe bet to say the young players at Arsenal have learnt a lot and have grown enormously, mentally as well as physically. For this reason, I claim they are much closer to winning anything this year than a year or two ago.

It only remains for them to go and give it all at Camp Nou. If they manage to win it, they will deservedly become one of people’s favorites to win this year’s version of the Champions League.
Posted by Unknown at 10:49 AM