Premier League High-Tempo Style: Arguments For and Against 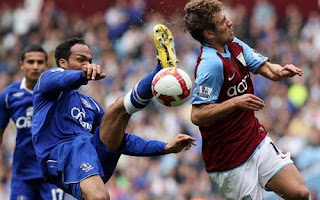 In the last several years, one league has stood up with its dominant philosophy on the European international stage: the English Premier League.

Why? The answer is simple: higher tempo of playing, the superior fitness that stems from it and the mentality to never give up until the final whistle is blown.

But looking into the prevailing style of this so enormously successful league, we see it has disadvantages as well as advantages.

What are they, you may ask?

Firstly, it must be noted playing at a higher-than-usual tempo requires almost perfect body fitness. Faced with a strenuous battle with himself, a football player must be well prepared beforehand. The importance of a successful outcome is thus placed on the preparation, or the training.

Undeniably, footballers from the English Premier League are fitter than their counterparts abroad. Constantly pushing for perfection, their bodies begin to resemble those of athletes rather than the bodies of people who simply exercise regularly.

They can’t be blamed. Modern football in England requires for a player to have a totally fat-free body with muscles well used to continuous energy-consuming work.

Alternatively, if one stops to think for a second, it makes perfect sense. The ramifications of the use of such peculiar style are beneficial, both financially and in terms of popularity, for English football.

The higher dynamics of this style will make it much more appealing to eye. Hence, the popularity worldwide will rise significantly.

Another ramification comes from the fact when people recognize this superior fitness of the footballers, they would expect them to fully fulfill that potential. Referees, as part of that group of people, do not differentiate from that opinion.

They allow a more direct, more physical style of play which will lead to less interruptions of the game. I could easily, with a hand on my heart, say that I watch more football – the quintessential meaning of it – in England than anywhere else in the world.

Apart from that, the dynamism of football that is played and the superior fitness the players develop in result of it allow a distinct advantage to English teams on the international competition stage.

How many times have we seen an English club progress to the final stages of an international competition – such as the Champions League, for example?

I am in no way saying that this is the only factor for that to happen, but it certainly is up there with the rest of the defining ones.

However, like everything else, the dynamic style of play has its disadvantages too.

It has been proven that accession of fitness is in direct ratio with the increase of testosterone in the blood. Testosterone is the hormone responsible for muscle and bone growth, but it also affects the mood.

Most often the more of the hormone someone has the more signs of aggression he will show.

Yes, better fitness, coupled with an approving nod from the referee, equals a more aggressive style of play.

This is one of the main disadvantages of the direct style of play that is worshiped in the Premier League. Not one or two ghastly injuries have we seen following a little more than usual aggressive encounter.

That exertion to the maximum is often the biggest causing factor for lighter injuries even. During every season, in England, an astounding amount of injuries are sustained by players. Especially near the end of the season when almost all have been squeezed out of the athletes and their bodies begin to crumble beneath the cumulated stress.

Despite defying all believes, the human body is not meant to take so much stress, a fact proved annually by the increasing number of injuries that occur.

Another negative effect that stems from the direct high-tempo style of play is the type of battles that occur on the field. A more dynamic game, in which the players move at all times, especially if organized pressure is applied in order to get the ball back in possession, would benefit battles in the sort of one versus two players rather than one versus one. With football being a team game, players must cover for each other, help each other.

In this way, if they have the sufficient fitness to keep burning that energy, we, the fans, would be most likely supplied with one player trying to out-battle the two or three facing him.

This, nonetheless, put the emphasis on defensive football and also restricts the usage of technique and tricks as they are rendered almost useless.

Football in England has become a huge commercial business in which rarely the health of footballers is taken into consideration. The satisfaction of the fans and customers has become more important.

High-tempo direct style of play has something tantalizing about it that lures people to enjoy its pure tension-charged atmosphere and pay more and more to watch their favorite teams exert to the maximum while they sit comfortably in their chairs.

As long as money is pouring into the kitty of the FA, they wouldn’t care if a player has sustained an open fracture, a head trauma, or anything else as ghastly.

The philosophy they had undertaken has brought the FA popularity. The English League is one of the most popular leagues in the world. Along with that, its clubs reap success in international competitions. But looking at the big picture, it’s obvious the philosophy is still a work in progress.

Ultimately, the style which the footballers will use on the field is directly influenced by what the fans want to see. Is that good or bad? It’s subjective.
Posted by Unknown at 6:50 AM