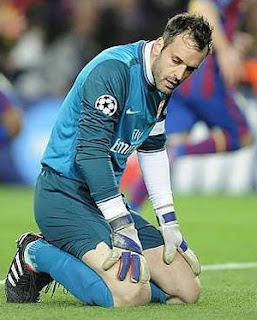 Hello and good bye. Hello to the readers of this article and good bye to Arsenal’s title hopes. What a suitable way to end them though: to lose against one of your fiercest rivals. Nevertheless, I have nothing against the Spurs.

They played their game and won. It makes that win look even more respectable after their hardships in the FA Cup, losing to Portsmouth after having played for a long tiring 120 minutes.

They defended perfectly, in a very organized manner. Well done, Harry Redknapp, and well done, players of Tottenham. You deserved your win.

But what side did you play against?

A side that had 8 days to rest; a side that had to rely on its reserve team after being crippled by injuries. But this is no excuse. All the teams with the title in mind have pretty much the same number of matches. What I was shocked about was how almost the same players who made an inspiring come back against currently the best team in Europe, Barcelona, looked so helpless this time.

Since the beginning of the match Arsenal looked sluggish. Sure, they had more possession of the ball, but the attack was as dull as a stick. They passed the ball in the centre of the park but met the well-organized defense of Spurs with a surprising lack of inspiration and creativity.

It only took ten minutes for the Spurs to exploit their North London rivals’ main weakness.

Manuel Almunia came out to collect what seemed an easy ball, but unknowingly why decided to punch it. The ball was met by the volley of the young revelation of the match Danny Rose. Almunia still had a chance to reach the ball, but slipped and failed to counteract, the ball passing just an inch away from his fingertips and into the goal.

It was one of those baffling mistakes that we have seen a hefty number of times this season. But, hey, Arsenal has come back from behind after similar stuff. Why not now? Well, not this time. It took me some time to perceive that.

Samir Nasri was not himself.

He rarely dribbled or attempted to use that killer dribble that he possesses. His passing was under par. His creativity – in the past.

His team-mate Thomas Rosicky was down there with him. He attempted a couple of shots which turned out to be very disappointing.

Emmanuel Eboue reminded me of that infamous match of his against Wigan in 2008: too many inaccurate passes and unsuccessful dribbles, just far too many mistakes.

Abou Diaby and Nicklas Bendtner were pretty much like twins tonight. Both of them were terribly slow and ineffective. Diaby’s strength was useless against the massive pressure that the Tottenham players amounted every time he received the ball. The Dane up front was almost completely cut off from the rest of the team. He should have tracked back more often. Not to say that his feet were sluggish at best.

The only thing that was exciting about him was his chewing gum. It was fun to watch how calmly he chewed that gum while things were going the wrong way.

The only light beam in all that darkness was the man who returned from a long time out of the game, Robin van Persie. How unfortunate for Arsenal not to have had a footballer of this quality at their disposal throughout basically the whole season.

Immediately after his involvement in the game, the Arsenal attack gained another dimension. A couple of defense-splitting passes reminded us of what the team had missed. But as it most usually happens inspiration can be stopped only by inspiration from an opponent.

Heurelho Gomes is the name. He made three superb saves to keep his team in the lead, two of which from a terrific and on-fire Van Persie.

One goal near the end was not enough to clear the shame off the Gunners’ faces after this terrible performance. Arsenal looked totally clueless and unmotivated for the bigger part of the game.

While some will make excuses with the explanation that key players such as Fabregas, Gallas, Vermaelen, Ramsey, and Song were out, I think slightly differently. This side had to prove themselves. Something they completely failed to do.

I’m much more willing to forgive my team after losing 3-0 after playing their hearts out on the field. That, however, did not happen tonight. The silly mistakes are part
of the game, but passion is what this game is about.

Come on! You are playing against you fiercest rival in a match that you have to definitely win to get your first title in five years. If that doesn’t motivate you then I don’t know what will.

Not all was hopeless though. I cannot skip to give credit to Gael Clichy for his stamina and to Van Persie for his exquisite skills. Thomas Rosicky was unlucky, and so was Thomas Vermaelen who sustained an unfortunate injury so early in the match. That battle-scarred veteran Sol Campbell was a joy to watch too. He gave his best and tried to rally the troops, unfortunately to no avail.

Another hard-to-swallow year. But hope seems to have become an inseparable component of the soul of the Arsenal fan. So, we’ll wait. Maybe Chelsea will stumble. You never know.
Posted by Unknown at 3:54 PM