Will Arsene Wenger’s Avowal Lead to Changes in Arsenal’s Team for Sunday? 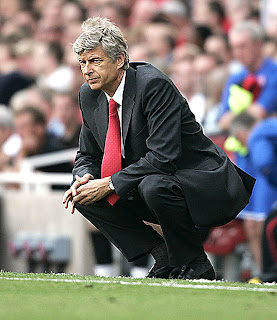 What a wonderful thing the truth is. It favors change for the better. What better basis to build on than the truth?

Arsene Wenger has taken a step towards building on the truth after frankly admitting he carried a significant part of the fault for the defeat at the hands of title-challenge rivals Manchester United.

The Gunners were defeated 3-1 in front of domestic crowd, but that was not the worst part for them. The worst part was they were tactically outplayed by a team that consists of, more or less, players of similar mould when it comes to talent.
Wenger stated on the club’s official website:

“I don’t feel we have been overrun, I feel we have put ourselves in the position where we are open to counter-attacks.

“We lacked a little bit of patience as well. Even when we came out at 2-0 at half-time, we were in a rush to go forwards. Let’s get back to 2-1 and then we see. Even at 3-1, we could have equalized in the last ten minutes”

It must have come as a shock to many football fans to see such a statement coming out Wenger’s mouth. The man has been known as being stubborn to a fault, apart from being optimistic to a fault.

Wenger’s admittance of past mistakes, gives the Arsenal fans some hope that he will probably tweak the team’s approach for Sunday’s game against current table leaders Chelsea.

Hope is also partially boosted by the fact Abou Diaby, whom is having a fitness test today, is likely to return to provide wider options in the midfield for Wenger. He can inject variety in both attack and defense with his box-to-box runs, strength, and size.

However, not Diaby but a more defensive style of play with the wise usage of counter-attacks, similarly to what United did in their Emirates conquest, could turn out to have bigger influence on a positive outcome for Arsenal.

Chelsea is a dangerous team which has a hefty number of potential match-deciding players—Frank Lampard, Diddier Drogba, Joe Cole and others— but a strong, organized defensive display rather than the usual of style of play may prove to be the more adequate approach to the game.

Potential problems might stem from individual errors of some of the Arsenal players – errors, however, which can be compensated by a strong team-work effort.
If Arsene Wenger goes into the game with the sword pointed at the right direction, the edge might as well sink into Chelsea’s heart in the end.

Otherwise, Arsenal will find themselves trailing by nine points and in a very difficult—and once again disappointing—position.

Come Sunday, Wenger will have his chance to redeem himself against another tactical mastermind—this time Carlo Ancelotti. He would certainly hope to postpone similarly baring acknowledgments of inferiority, which go inseparably with football, for other less-fortunate times.
Posted by Unknown at 9:24 AM