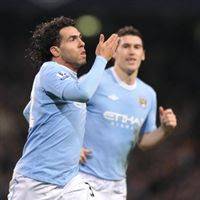 Today, at Stamford Bridge, we found out just how important really Petr Cech is for Chelsea. The myth that Chelsea is different than the others teams from the Big Four when it comes to the presence of more than one key players in the quad was screamingly busted.

We witnessed just how important the role of the imposing goal keeper of Chelsea is, just how much influence he has on the defense, and how different the team looks without his presence.

In one of those, it was diminutive Carloz Tevez who scored to level the earlier opener of Frank Lampard. The first half was Chelsea’s; well, at least when it came to statistics.

Not much time passed after the second half had resumed and another illogical thing happened: Craig Bellamy took full advantage of his speed on yet another counter-attack by the Blues (light blues) and made Cech’s unfortunate substitute Henrique Hilario look bad for the second time in the match.

Petr Cech’s substitution should have done better—there was no doubt.

Seventy-six minutes of statistic-defying ended when Juliano Belletti deservedly earned a red card by tripping Gareth Barry inside the penalty box. He was the last man – a red card was mandatory. Tevez further strained the nerves of the Chelsea players by materializing the penalty—3:1 for Manchester City.

The final part of the match was basically a demonstration of frustration and inability by the Chelsea side to counter the unfavorable fate that befell them on the day.

Michael Ballack’s nerves gave way, earning him another red, after a hack on double-scorer Carlos Tevez which brought the desperation of his team-mates to a maximum. It was then absolutely logical for Manchester City to score a fourth. Bellamy was the one who did it.

In the end, Mike Dean decided that two red cards were too much and presented Chelsea with a penalty. Too little, too late though. The final result 4-2 is just what Arsenal and Manchester fans (both big clubs) have been waiting for.

In case Manchester United and Arsenal succeed in their challenges this weekend, they will be one and three points, respectively, from the currently-in-pain leaders Chelsea.

The defeat was surprising, but predictable, in a way.

The statistics were firmly in favor of Chelsea, whose Stamford Bridge was like an unconquerable fortress up until now. Other teams have managed to defeat Chelsea in front of their own fans only three times in the last 97 games—defeats at the hands of Liverpool, Arsenal, and Manchester City.

These are numbers that defy the events of today, but numbers that cause both pain and joy to football fans—pain to Chelsea’s fans and joy for those who may see this as an opportunity.

It was also predictable because of Petr Cech’s absence. The stability and calmness that he offers his team-mates will be hugely missed. Chelsea’s player can only hope for his speedier recover for them to keep their title-challenging chances alive.

Chelsea must now try their best to pick themselves up after this serious blow to their confidence, and Arsenal and Manchester United have all to play for, once again.

The title race is not over. It has just began.
Posted by Unknown at 8:12 AM