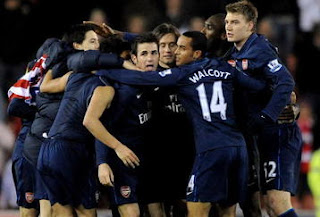 I am going to talk about team spirit, change, experience, motivation, and mentality.

Just before the game with Stoke, it was believed Arsenal had a chance for the title. And why wouldn’t it? They had the easiest match program of all their title-rivals with only one potentially harm-causing game—the one against fierce rivals Tottenham Hotspur on their own stadium.

While it was expected the match against Stoke to be a hard one, no one really believed that it would be much harder than what their first initials impressions were.

Arsenal was, literally, in for a battle.

It did not come as a surprise to see Stoke fighting in all areas of the field, causing all kinds of troubles to Arsenal. Then something happened, something familiarly—if I may call it this way—horrific.

It was an event that revealed the real growth of maturity of the Arsenal players.

Facing yet another shocking sight, it was normal to see scared, distraught, and filled with ghastliness faces. The reactions were expected, but how the players responded was a completely different thing.

Nicklas Bedntner, still visibly shocked, stayed with Ramsey along with Stoke’s Glenn Whelan, and tried to comfort him. Emmanuel Eboue joined him only seconds later. Thomas Vermaelen was holding his face trying to make sense of the horror he had just witnessed. Later in an interview, he said: “I heard a strange noise and after that I saw his [Aaron Ramsey’s] leg.”

The shock was everywhere. Cesc Fabregas, the team captain, was angry at first, then confused, and then worried. Almost all players were holding their heads.

As the commotion of the initial shock started to fade, the players on the field were left with questions. What were they to do now? It is then when signs of maturity and mental strength began to spring up in the Arsenal team.

Gael Clichy, calmness returned, started to rally the troops up. He patted Vermaelen on the stomach saying, “Come on, come on!”

As Ramsey was still being tendered the Arsenal physios, Vermaelen was trying to regain control of himself. What I saw seconds later startled me. Still covering his mouth with his hands, thoughts visibly flying in the Belgian defender’s head, he frowned, picked his head up, and all was gone except determination.

There was not a trace of emotion left on his face. He was once again the Verminator.
The match resumed and there was work to do.

Wenger’s men knew that they had to overcome the shock. Memories from the match against Birmingham two years ago when Eduardo da Silva’s leg was almost split in two still haunted them. They weren’t able to recover from the shock then, played with lack of desire caused by the fear that the sight of an open fracture instilled in them.

This time it was different. They put their fears aside and finished the game off.
Close to the end of the game, Cesc Fabregas demonstrated why he is captain of this team.

He took the penalty that was given by referee Peter Walton with composure that a stone would have been proud of. Later, he even dared to demonstrate just how Tony Pulis’s tactics worked, which earned him a few colorful phrases from the Stoke city manager—an action that might as well have earned him a yellow card.

Thomas Vermaelen capitalized on his determination by scoring a goal. You could see just how much this game meant to the Gunners as they celebrated the goal in a fashion much similar to the celebrations of goals scored in the final minutes of the Champions League final.

It meant a lot. And how couldn’t it?

It wasn’t just goal. The meaning was much deeper.

It was a triumph of their characters over the most difficult of obstacles—the fight with oneself; it was a reinstatement of their self-belief.

The goal was the climax of a test of mentality. Arsene Wenger was right: His team is much more mentally tough than one year ago. The unity is unbelievable.

The smiles were for all to see. Team captain Cesc Fabregas went on to congratulate his team-mates on a job well-done, and then he and Clichy called everyone over and had a group hug.

Britannia Stadium was a battle ground. Arsenal left casualties there, but they came out of the skirmish stronger. Aaron Ramsey is a cause now. And the Premier League title still waits for its next engraved name.

It might just be Arsenal FC.
Posted by Unknown at 4:49 AM