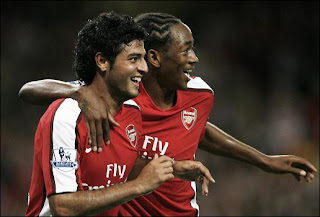 Flowers may not seem to be blossoming for the Gunners at present times. Two losses in a row in the Premier League—one against a supposedly inferior team. Understandably, the spirits of the team have been lowered. Nobody wanted to record a defeat, especially two, that’s for sure.

But all is not lost. While Arsenal is currently trailing 11 points from the leaders Chelsea, there is still hope as a significant part of Chelsea’s team is to leave for the Africa Cup of Nations in January. Same goes for a lot of other teams.

Nevertheless, the source of hope and uplift may come from the most unexpected places. The youngsters at Arsenal, ironically, can be the ones to provide the team with a significant moral boost.

The injury epidemic at Arsenal brings them one step closer to their dreamed first-team participation.

And what better motivation than seeing what you want just in front of you, only an arm’s reach away; and the only thing you have to do is just reach and grab it.

Just recently, after the match against Chelsea, Wenger announced that the youngsters will get their chance to prove themselves.

On Wednesday, Arsenal is playing Manchester City in the Carling Cup. A good performance by either of the aforementioned players can put pressure on the first-team starters to perform better.

Eduardo is one of those players; undoubtedly, he feels Carlos Vela breathing down his neck. This may prove beneficial to him. Even if it does not work, it is a good chance for Vela to apply for a regular first-team place, in case he provides several good performances, of course—a chance he will definitely have in the coming weeks before Niklas Bedntner returns from injury.

Similar is the situation on the left-back position. Personally, I was tad surprised to see Kieran Gibbs being chosen over Armand Traore during the last year. I have always considered Traore to be the more progressed player. But this still is beneficial for the team. Competition will always raise the bar for its participants.

With Clichy out for another two weeks, and Gibbs out for a significantly longer period of time, it is a golden opportunity for Armand Traore—an opportunity which he surely has waited for a long time.

Another positive sign can be found even in the much tormented and problematic front-line of Arsenal.

The absence of Van Persie is certainly a big blow for the Gunners, and Eduardo’s current form does not help as well. But here’s where two relatively new faces will see their chances.

Carlos Vela has been talked about a lot, ever since the time he spent loan spells at Salamanca and Osasuna, where he gained invaluable experience and was often involved with the first team. Now, he is prepared for Premier League football. His fitness is top notch, and he is more eager than ever to prove himself.

"I really want to improve on last season," he said. "I want to score more goals than last season and play more and the main aim for the team is to win something."

After an injury-stricken beginning of the season, the hunger for improvement for Carlos Vela is there. There is only one way for him: up. And what better than that for the team.

Another new face that may become involved in Arsenal’s attack, and most likely will be seen in the game against Manchester City, is Sanchez Watt.

I have always been an admirer of the youngster’s skills. Skills he demonstrated during the team’s preseason preparation. He is tall, technically apt, and reads the game very well.

He recently signed a new contract with Arsenal which proves that he has what it takes to remain at the club.

"This is a contract that gives me more time to prove myself and hopefully I will," he said.

"I want to get a few first-team chances, even just getting in the squad because you know you're improving if you're getting on the bench because there are a lot of players in the team.”

He is still quite young and is ever-improving, but if he is able to grasp his chance against Manchester City, he can be a contender for a first-team spot, or he can provide some pressure on the first-team starters, and maybe push them to improve their form.

Vito Mannone is a young player who has already proved himself to a degree. Now that he has tasted first-team football, the motivation to come back will be even stronger. He is a more than decent goal keeper who could become the next big thing, but at the moment, his drive to get into the first team can be beneficial for the first team.

Even in an injury-stricken squad like the current one of Arsenal, the youngster can provide Wenger with a headache or two. But that is only if they perform well.

They will have their chances, as Wenger said. It’s up to them.

And at times like this, their determination to prove themselves is exactly what the team needs. Ironically, the source of problems that the age has caused for Arsenal can be the source of hope and inspiration as well.

Good luck, young Gunners.
Posted by Unknown at 3:24 AM