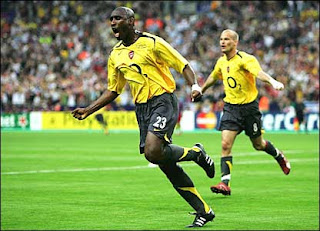 One of Arsenal’s most successful centre backs, and a significant part of the “Invincibles” team, Sol Campbell, has been seen at the Arsenal training grounds.

Back when Arsenal completed their last trophy conquest, Sol managed to blend in perfectly with the Arsenal squad, forming a solid partnership with Kolo Toure who is now at Manchester City.

Campbell, 35, was released by his last team, Notts County, by mutual consent of both him and the club, and is now free to pursue a new contract. His presence at the Emirates, however, should not be read much into, according to Arsene Wenger:

"I don't know about that yet," said Wenger. "I haven't thought about it.

"I love Sol Campbell and the fact he came back here and wanted to practice with us shows that he loves the Club as well.

“You never say never in this kind of situations. He can still do a job in the Premier League especially now he is fit but at the moment we have no need to sign anybody."

However vague the situation is, a certain question arises: Can Sol Campbell help the team, or at least, can his tons of experience help in some way for some of the youngsters to improve themselves if he is re-signed by Arsene?

With the presences of the new summer acquisition Thomas Vermaelen, the ever-solid William Gallas, and second picks Philippe Senderos and Mikael Silvestre, one might begin to wonder whether Sol is really needed at the moment. Another defender, Johan Djourou, may be out until the end of March, which only puts more emphasis on the question.

One thing is certain; Sol would love to come back to Arsenal. It’s an entirely different thing, however, whether he will fit into the squad at present time.

So, here comes your opinion.

Do you think he will come as a plus to the current squad?
Posted by Unknown at 1:44 PM