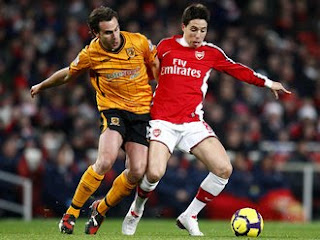 It took 60 minutes for Phil Brown’s side to realize that they have been defeated at the Emirates Stadium. From the beginning of the game, the Tigers threw themselves into the game with little regard for how much they would be able to keep up with this high level of play.

They made it clear that they would fight tooth and nail for the three points. But that’s where tooth and nail became too literal for football’s standards. The tactics were obvious: direct play, closing down all around the field, and Craig Fagan alone on the front-line.

Now, there is nothing wrong in being more direct, or making harder tackles than usual; it has actually been proven to be the right step in neutralizing technically superior teams. But the Hull City players were trying to come up with a new definition for the word DIRECT (adjective in this case).

Steven Hunt attempted to push Manuel Almunia’s buttons with a couple of improvised provocations. Sparks started to fly as the Arsenal goalkeeper responded to one of Hunt’s challenges. Referee Steve Bennett, however, kept thing under control with a few strict words to both of them.

But the match almost got completely out of hand when just before the end of the first half, Arsenal won a controversial free-kick 10 meters away from the arc of the penalty area.

As referee Steve Bennett was trying to affirm his decision of awarding the free kick, the strangest of things happened. Seeing Samir Nasri walk slowly toward him, Richard Garcia identified and seized his chance. He crumbled on the ground as soon as he felt the slightest touch by Nasri.

And that’s when it started to look really odd.

As if stung by bees, at least five Hull players reacted violently. Led by Steven Hunt and Nick Barmby (who was substituted on break), the Tigers jumped forward at Samir Nasri to seek justice.

Nasri stumbled backwards, some Arsenal players rushed in to help him, and then the melee unleashed. It took a full five minutes for Bennett to reinstate control of the game. What was strange in this situation was that Hunt saw the whole incident happening just before his eyes and nevertheless impulsively dashed forward.

Bennett summoned Nasri and Barmby, showing them the yellow card.

As the game progressed the fog around Fagan’s role started to disperse as well.

He created practically nothing for the duration of the entire match with the exception of a few well-performed simulations. It was obvious that the reason why Phil Brown had chosen to field Fagan instead of the much more powerful and adept in the air Daniel Cousin was because of the striker’s highly developed artistic talents.

And it almost gave result, when in the 56th minute Fagan fell on the ground, claiming that he was held by a surprisingly well-performing-on-the-night Mikael Silvestre. The Arsenal defenders were surprised to see referee Steve Bennett point towards the spot, repeatedly pulling his shirt in response to their astonished expressions.

Higher powers were at work on that night though and justice was served.

Manuel Almunia guessed the direction of Giovanni’s shot and parried the ball, only for it to land on the head of oncoming Hunt, who along with a couple of his team-mates made final attempts to net the ball, but miserably failed to do so.

That defined the turning point of the match and from there on, there was only one team: Arsenal. With two more goals, the match was pushed into formality—3-0.

Nevertheless, the result was not the most important thing this Saturday night.

It was the resoluteness and intelligence the Arsenal players showed to deal with a very tough opponent, especially at a period of time when their captain, Cesc Fabregas, was missing.

As for Phil Brown and his side, they gave it all—maybe even more than that. That is football.
Posted by Unknown at 5:01 AM