Time to Give Thomas Vermaelen Some Well-Deserved Credit Again 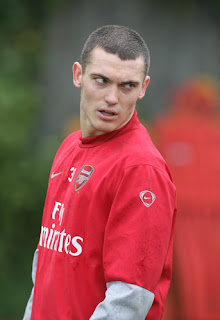 Arsenal is a squad with predominantly young players.

In recent years, a wide variety of epithets have branded this same young side. They have been called green, talented, soft, lacking, prodigious, and a lot more—epithets that have become difficult for the Gunners to get rid of.

But one event in the summer is responsible for breaking the status quo, contributing to the destruction of the epithet “softness.”

The arrival of Belgian defender Thomas Vermaelen from Ajax highlights the intentions of Arsene Wenger to make his side tougher—to close the gap of this side and the side that was before Patrick Vieira’s departure.

Who is a better suitable man to help Wenger with this cause than the ex-captain of Ajax?

The guy has all that is needed. He has fit perfectly into the team, successfully striking a comfortable understanding with his defensive partner William Gallas. At only 10 million, Vermaelen looks like yet another one of Wenger’s trademark bargains.

The 24-year-old centre back has been able to offer the much-needed stability at the back with his quality positioning, which in turn is the basis for his superior aerial ability—something that Arsenal have suffered a lot from on countless occasions.

The reason for even more nods of approval is the fact that the Belgian defender seems to have a good taste for attacking, managing to produce some spectacular forward rushes. His five goals, emotional stability, never-ending energy resources, quality positioning and tactical knowledge, and great heading ability are exactly what Arsenal has needed since ex-team captain and midfield powerhouse Vieira left the club.

Even with emerging star in the squad Alex Song, who is currently on the radars of just about every pundit, Vermaelen has somehow managed to draw applause from the Arsenal faithful.

His stellar performances have earned him two consecutive player of the month awards. He has worked hard, and it looks like he is not content with his form but is willing to improve even more. His consistency has been a most welcome and calming balm for Wenger’s young side. What better than to have a player who gives his best in every single match?

This is exactly what Thomas Vermaelen has been doing. With his all-around abilities as a footballer and leadership skills, Thomas has become an irreplaceable ingredient of the first team. Only he and ex-captain Gallas have played in all of the 19 matches in the Premier League so far, and it is easy to see why.

Even though the Arsenal defense have allowed the ball to roll into their net a total number of 21 times, it is still one of the best among the teams in the Premier League. The only signing of the summer for the Gunners carries a good proportion of the responsibility for that to be true.

Song may be becoming a key player for Arsenal, but Vermaelen has already transformed into one.

The fact that it has taken him virtually no time to adapt to the significantly faster tempo and hard-tackles style of play of English football makes his progress look even more impressive.

If Arsenal is to win their first trophy in five years, the Belgian will be undeniably a major factor for this happening. It’s a question of time for his team’s successful trophy run to come true, just the same as it is only a matter of time for Thomas Vermaelen to earn his well-deserved glory at Arsenal.

He has all that it takes. Do not doubt that.
Posted by Unknown at 10:16 PM