Arsenal: Observations of a Fan on the Gunners' defeat against Chelsea 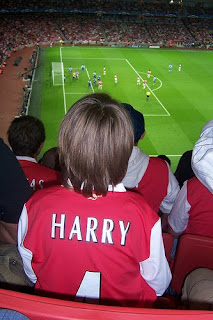 In the most anticipated match in this round of the English Premier League, Arsenal travelled to Stamford Bridge to face the current top of the crop team, Chelsea. Expectations tilted towards the team clad in blue as they were not only in a great form but also their opposition, Arsenal, was struck by unfortunate injuries.

Key players, namely Robin van Persie, Cesc Fabregas, Thomas Vermaelen, and Theo Walcott, were not available for Wenger’s selection - a fact that might have caused an annoying headache for Le Professor.

But, for once, I’m not going to talk about what happened and how it happened. I will tell you what a prejudiced Arsenal-minded fan, me, saw of it.

As I was preparing myself to sit down and watch yet another disappointing match - let’s face it, it all pointed toward another disappointment - I couldn’t help but notice a small tint of warmth forming in my chest. The kind of warmth that keeps you going despite all the setbacks.

Yes, I had hopes for this match.

Despite all the rationalities - the form of Chelsea, the injury-crippled Arsenal, Diddier Drogba, Lukasz Fabianski, and all the other factors that pointed towards extending the victory-less run of the Gunners - hope was finding its way into the light.

I almost got used to being taunted by friends’ remarks and comments about how Arsenal were going to get thrashed by Chelsea, but what was strange was that I simply left the events to unfold, knowing that they might be both right and wrong at the same time.

As the match progressed, that small positive feeling began to get confirmed. Arsenal were playing well enough: organised at the back, good passing, creating the occasional chances. They were countering Chelsea’s tactics very well. Still, I knew that anything could happen when football is played at this level.

The battles on field were exhilarating, the tempo leaving you with little time to think through what has happened. Unquestionably, it was a clash of the highest level - one that all the fans enjoy seeing each and every time.

Then it happened: Ramires sped on the left flank, crossed the ball, and with surprising agility Diddier Drogba sent the ball rolling behind Lukasz Fabianski.

Drogba once again scored against his favourite opposition. This time, it looked like it was accompanied by a little more luck than his previous successful Arsenal endeavours. Luck or not, it was 1-0 to Chelsea.

Still, that comforting feeling was there, refusing to disappear.

As half time break approached, I thought about the possibilities that could get us back into the game. The first half was not that bad: Wenger’s side passed the ball well without making mistakes and looked like they have as many chances to score as their opposition.

We had Tomas Rosicky, Carlos Vela, Denilson, and Emannuel Eboue on the bench, who could be used as attacking options . With the absence of team captain and playmaker Cesc Fabregas, the weight of organising the attack landed on Samir Nasri, youngster Jack Wilshere, and Andrei Arshavin. Maybe with the involvement of Rosicky, it all looked like Arsenal’s attacks will improve.

The second half started, Rosicky was not on, but the Gunners stormed forward. For 20 minutes, they held Chelsea back, who I must admit looked very comfortable with the situation. The possession was 60 to 40 to Arsenal. Chances came and went, but the goal evaded them. Kudos to the good organization by the Chelsea defenders.

And then, around the 60th minute, the Gunners eased the pressure on the pedal. Did they get desperate? Did they lose faith that they could come back into the game? These and a lot more questions flooded me. As I saw it, their incessant infertile attempts demoralized them. And that’s when my hope, that they will come back, began to fade. Still light beamed, almost getting completely obliterated by a mistake made by Squillaci to allow Anelka to squander a perfect opportunity in front of an empty goal.

As I was watching Rosicky coming on, I knew he will not change a lot. He’s been below par in his recent games. Another thing that worried me was that Samir Nasri played below his abilities as well: he started making mistakes resulting in several counter-attacks by Chelsea; his imagination was wailing, failing to provide that killer pass.

Ten minutes from time, it all became obvious, and my fears were confirmed. Alex’s piledrive from a free-kick ended it: 2-0. In truth, no one could be blamed about this goal. Fabianski could have hardly done anything to reach it. It was a nicely executed free-kick that Chelsea had obviously worked on in training. Flaurent Malouda squeezed in the wall only to get out of the ball’s way when the free-kick was taken.

No one could have done anything to save that shot.

It was all done. It finished 2-0. Arsenal lost and continued their run without a win, not stretching to three games. As expected, Chelsea won the battle, but also, as expected, hope was still hanging around despite the signs pointing towards defeat.

Undoubtedly, I will still feel this way - no matter who Arsenal are facing. Hope never dies for a fan. It is still too early in the season to count them out of the title race; key players will return, and with little luck will stay fit. All that is needed is a little luck and hope because no one can refute the simple fact that the Gunners have the team to win the title.

Chelsea won the battle, but not the war. It’s far from over.
Posted by Unknown at 7:38 AM