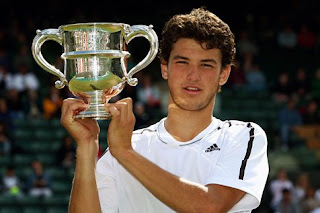 Remember what Roger Federer was in his early years of playing tennis? Or Pete Sampras? Or Rafael Nadal? They have all started from somewhere and succeeded in becoming one of the best at what they do. Well, let me introduce you to someone who has the potential to inherit their tennis crowns in the coming years.

Grigor Dimitrov is a very young tennis player from Bulgaria; in fact he is only 17 years old. Demonstrating some incredible talent on the court he has sparked the imaginations of thousand of tennis fans for what he could become in the future.

He has produced some wonderful performances at a very high level in the recent years. Dimitrov is also considered to be the best Bulgarian tennis player at the moment, despite his tender age.

Some people could argue why this boy is special. But the facts speak for themselves.

The Bulgarian wonder kid has some memorable successes under his belt.

Arguably, one of his biggest conquests in tennis so far is his great success in the Wimbledon junior tournament in 2007. He triumphed as champion, destroying all the opposition he faced.

What was even more impressing was that he did this without even losing a single set while playing with a shoulder injury which restricted him from serving at full speed. Undoubtedly, it was a memorable performance from the young Bulgarian.

Grigor Dimitrov continued to reap success during the next year as well. He strolled to victory in the US Open for juniors by beating American Devin Britton 6-4, 6-3 in the final. Thus he secured his second major title in less than a year.

Once again, he crushed his opponents, losing only one set to the seeded No.1 in the tournament - Tsung-Hua Yang, who he met in the semi-final. After the tournament the 17 year-old stated that this would be his last participation in the junior division and that he would try his luck with the professionals.

His success and spectacular performances in the junior tournaments are not the only reason that leads me to believe that he could be the next big thing in tennis.

When you find skills and talent, usually seen in an older person, in someone in a less advanced stage of their lives then you begin to wonder how this has happened.

The truth is that it is something that just happens. Some people have that ability to be more efficient than other in some activity. It seems Grigor Dimitrov has that extra ability, or shall we call it talent, for tennis. And when you couple it with some other favorable conditions, the result is usually class act.

But what does really make this Bulgarian wonder kid so good? What skills does he possess that separate him from the other?

In spite of his years, Grigor Dimitrov has a very stable mentality and this in one of the main reasons behind his success. Not be discarded are also his speed and pace on the court, powerful strikes and even more so serves, and least but not last his brilliant technique. The 17 year-old has also proved more than once that he is an all-court player, particularly strong on the baseline.

Another factor which can prove beneficial to his development is that he has a great coach by his side. And he is indeed Peter Lungren, the same guy who used to coach Roger Federer.

Mr. Lungren’s comparison of Grigor with the great Roger Federer is something that confirms the belief that the young Bulgarian is something special. He said: “Dimitrov is better than Federer at 17 years”.

Let’s hope the young talent takes the right path and makes the right choices and eventually even overtake Federer’s level of skill in tennis in the future. You never know.

All of Dimitrov’s qualities surfaced when he met the current World No.1 Rafael Nadal in February this year. The wonder kid lost but was able to keep his dignity in tact by taking a set from Nadal.

Surely, he managed put himself on the map with a performance like this. This and other great performances have helped him climb the ladder where he is currently ranked 400th.

It remains to be seen what this young tennis player can do in the future. One thing can not be doubted though; he has great potential and talent, and all the necessary ingredients to become a great tennis player in the future. I, for one, wish him the best of luck, not only because he is my countryman but because tennis could benefit from a player like him.
Posted by Unknown at 2:32 AM