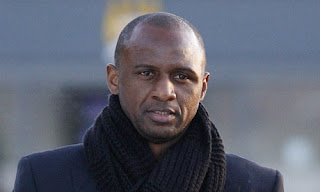 As of June 16, 2011, the Arsenal legend Patrick Vieira is a free-agent after finding himself outside the plans of Manchester City’s manager Roberto Mancini. The 34-year-old Senegalese-born defensive midfielder spent a year-and-a-half long spell at the Blues, scoring three goals in 28 matches.
Now that he is a free-agent, we can’t resist but ask the question: Can he be the salvation for Arsenal’s arguable lack of winning mentality?
On the surface, Vieira looks like a transfer target that Arsene Wenger may not be quick to dismiss. He is free to join any club he wants, has rich history with the Gunners, and is very experienced. But what makes him most considerable for Arsenal’s signature is his much-familiar character.
Who could forget his indomitable spirit and leadership qualities?
Patrick Vieira was the captain of Arsenal for four hugely successful years in the club’s history: from 2002 to 2006. He was a key member of the “Invincibles” squad of 2003/04 and was the man who added the last significant trophy to Arsenal’s accolade room in 2005: scoring the winning penalty in the final of the FA cup against Manchester United.
But it was his character, more than his abilities on the field, which was in the root of many successes for Arsenal. He was the leader, a man who team-mates could look up to in difficult times. He still has it in him.
Roberto Mancini has reportedly offered Vieira a coaching role at Manchester City because of his influence on the other players, but the soon-to-be-35 player has refused with the belief that he still has something to offer to the game the most likely reason.
“It is still 50-50 at the moment [to retire or keep playing].” Vieira said earlier this month

“It would not be a problem for me to stop tomorrow because I have been lucky enough to experience everything… I still want to play and if I have an exciting proposition here (France) or somewhere else in England, I would probably play on.”

“If I have nothing exciting, I will stop. There is a chance I could stop, but at the moment my mind isn't telling me that I will be stopping in a couple of months.”

Quatar, where he can still find clubs who will be able to match what he was earning at Manchester City, the Major Soccer League, where his Arsenal ex-team-mate Thierry Henry is playing, or going back to France remain some of the probable destinations for celebrated midfield veteran.
But could it be Arsenal?

He could play an important role as a player/coach and will definitely offer something to the considered “green” squad of Wenger. Undoubtedly, he can exercise positive influence on the players in the dressing room by infecting them with that much-sought-in-life attitude of “never give up”.

The biggest block to such a move would, of course, be the wage the Arsenal club is willing to pay to the aging player. At 34, he is unlikely to be offered an astronomical wage, but his motivation may lay elsewhere: he is a fan of Arsenal and is likely to play Champions League football again.

Whether Arsenal signs him or not, there is no doubt whatsoever Vieira will remain one of the club’s all-time legends.

It certainly will.
Posted by Unknown at 7:29 AM