Arsenal FC: Steps To Avoid the February/March Collapse Next Season 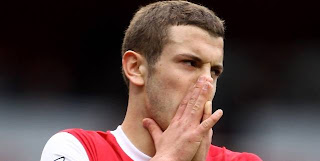 In the past four years, Arsenal have been a step away from going through the Premier League finish line triumphant. Losing several key players during the transitional phase of moving to the Emirates robbed the Gunners not only of depth, but also of experience.

Inevitably, results suffered. But what was interesting was how and when the negative results were more likely to occur. Logically, lack of adequate depth of the team meant limited resources. A player just cannot play all season without adequate rest. Injuries also go hand in hand with fatigue.

Hence, by mid-February or March, Arsenal’s strengths start to diminish to a level where they are title contenders no more.

Already in the pit hole of dwindled resources, the light that could bring them out—a nice blend of mental strength and experience—was also nowhere to be seen. Usually, after a negative result follows another negative result, if the chain is not interrupted by wise decisions—wise decisions that experienced players can take.

Arsenal have lacked that.

Those two factors contributed to the repetitive occurrences of negative outcomes in the months of February and March in the past four seasons—what we may call the winter collapse of Arsenal.
How to deal with that collapse? What to do to improve the chances of that not happening again next time?

There are ways. Here’s one:


Step One: Strengthen the Squad by Bringing in a Few More Bodies

The first step would be to buy yet another defender of close-to-world-class ability and partner him with Thomas Vermaelen, or promote a defender with huge potential and use him as cover for the rest.

Arsenal already have three very good defenders in Johan Djourou, Laurent Koscielny and Sebastien Squillaci.
Based on style of play, they are different from each other. Djorou, for example, is good in the air, marks well, positions himself adequately as well as reads the game well. Koscielny is brave, not afraid of challenges and is a great tackler. Squillaci is also good and very experienced, but tends to have lapses in judgment occasionally.

The Gunners also have one world-class defender in Thomas Vermaelen. He is tenacious, brave and good in the air, positions himself well, a good passer and a leader. On top of that, he possesses a formidable shot.

All in all, Arsenal have four defenders—a good number for any team out there. But in order for the next step in eliminating the February/March collapse to be put to work, another defender must be brought into the picture.

This can either be a defender brought from outside—a very good, experienced defender to partner Vermaelen—or a defender from the youth ranks to cover for the others, like Ignasi Miquel. The former would be the best choice.

On the defensive flanks, the need of good cover for Bacary Sagna on the right side is evident. A player with qualities similar to Sagna’s could be brought in and through Step Two, could contribute to Arsenal’s endeavors.

In midfield, Arsenal will benefit from bringing in yet another great midfielder. With the probability of Cesc Fabregas leaving in the summer, a void would be left, most likely benefiting youngsters as Jack Wilshere and Aaron Ramsey. But with his departure, the midfield line will be weakened minus one body and the skill of the Spanish captain.

A good choice would be a player who is in his mid-20s and has proven himself—one that has the necessary skill and vision to serve as a rock in difficult times. Of course, that will require some money to be spent, but with the club’s debt diminishing by the month that is likely to happen.

In the front, four attackers contribute to finishing off the Arsenal attacks: Nicklas Bendtner, Maroune Chamakh, Robin van Persie and Theo Walcott. It’s a potent forward line capable of dismantling even the most resilient defenses, but if we are to see Step Two put to work, we’ll need another attacker.

Of course, the hypothetical forward would need to possess skills worthy of world-class club’s forward line.
Now, we are ready to proceed to Step Two.

Give the opportunity for other players to take part in Arsenal’s hunt for trophies every other match. By having a squad with an almost evened out class spread among the players, the opportunity of giving rest to every one of them and creating an atmosphere of “friendly” competition is presented.

In defense, for example, a good mix of central defenders could be used, along with playing the covers for the full backs every third or fourth match, depending on the fixtures.

For example, Laurent Koscielny and Johan Djourou could start sometimes to rest Thomas Vermaelen and the guy who partners him. On the flanks, more playing time should be given to Kieran Gibbs on the left, and the cover of Bacary Sagna on the right side.

In midfield, there are plenty of talented players in the squad to make the use of rotation possible as it is, but Arsenal will surely benefit from signing one more talented and experienced player with a slightly more defensive-minded attitude. He could serve as a partner of Alex Song, playing just behind the more creative midfielders; this would also allow Jack Wilshere to develop his attacking game.

The probable departure of Cesc Fabregas can be a blessing in disguise.

The Arsenal captain has not given his best season this year following the huge speculation of him leaving for Barcelona during the previous summer. Also, he was plagued by a recurring hamstring injury. This, however, gave the chance to Jack Wilshere to rise to the challenge and, so far, he has done it perfectly.

In case Fabregas left Arsenal, the money could be used for buying the aforementioned midfield player and one more to serve as his replacement.

In attack, there is a wide variety of strikers in terms of style. Arsenal has Theo Walcott who could play either on the wing or as a striker; his speed puts him in a different dimension to the other strikers.

Nicklas Bendtner and Maroune Chamakh are of a similar mould. They are both good in the air and imposing in terms of physical stature. They could be rotated depending on current form and to give rest to other strikers.

Robin van Persie’s skill and deadliness in front of goal will ensure that he will start in most of the games, except when he needs rest. He could be partnered by either Walcott or Bendtner/Chamakh, depending on the opposition.

Another striker could be bought in the summer to serve as a cover in case of injuries, or the talent of Carlos Vela could be finally used to its full potential. In truth, he deserves to play for Arsenal, but so far, hasn’t received a real chance to prove himself. 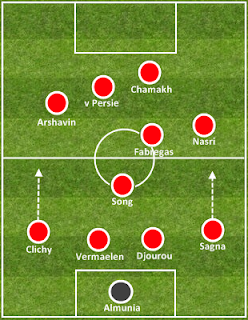 More than once Arsenal has been branded a predictable team. They like to play attacking football bent on possession of the ball. While this has been effective in the past and in the beginning of the season, it has also become predictable and easy to counter by other teams.

Arsenal suffers against well-organized defensive teams, and it is especially against those teams that something must be added on to increase the chance of snatching all of the points. While there is an entirely different game on the field, the psychological one could improve results with the implementation of several other tactical innovations.

For example, more shots from outside the box could be taken; more chip balls above the defense; more individual play; and last but not least, more traps should be laid. Passing the ball in their own half could draw out the oppositional team which would present a chance for a quick attack to be more effective amidst their more dispersed ranks.

Consistent tactical innovation along with rotation throughout the season—and especially during February or March, when the second fixtures between Premier League teams are played and fatigue is taking its toll—could do wonders for Arsenal.
Posted by Unknown at 3:12 AM